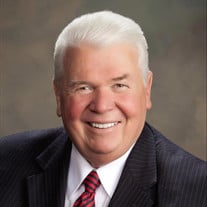 Steven Thomas Densley, 74, passed away peacefully on July 24, 2021, Pioneer Day. He was grateful for his pioneer heritage and often repeated the quote: &#8220;The world we live in is a legacy left by those who have gone before. Tomorrow&#8217;s... View Obituary & Service Information

The family of Steven Thomas Densley created this Life Tributes page to make it easy to share your memories.

Send flowers to the Densley family.