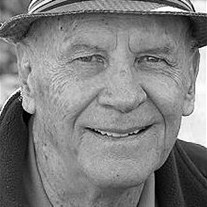 Steven Warner Heiner, beloved husband, father, grandfather, great-grandfather, and friend, passed away peacefully on April 9, 2015, surrounded by his immediate family. Steve was born in Salt Lake City on August 21, 1933 to Cash and Edna Heiner. He grew up in the Salt Lake area with his four siblings. On June 8, 1955 he married Gloria Rose Johnston in the Salt Lake Temple. In 1961 they were blessed with a son named Steven and four years later a precious daughter named Kara. Steve's lifelong love of golf started in his youth when he worked as a caddy at the Salt Lake Country Club. He often carried two golf bags at a time for patrons of the club. The golf bags were almost as large as he was. Later his game improved so much that he, in his lifetime, scored at least 5 hole-in-ones. Steve's interest in sports was ever-present. He started playing basketball seriously at South High School in Salt Lake City at a diminutive height of 5 feet 5 inches tall. His personal tenacity and superb athleticism eventually led him to a competitive height of almost 6 feet and the Utah 4A State Basketball Championship. Basketball has always been an important element in Steve's life and he eventually played guard on the University of Utah basketball team. Steve also had a real talent for baseball where he played third base for several championship teams during his junior high and high school years. He also enjoyed tennis and almost anything athletic his entire life. While attending the University of Utah, Steve participated in Army R.O.T.C. where he earned the rank of 2nd Lieutenant. Following graduation, he was stationed at Fort Benning, Georgia. In 1956 he and his new bride, Gloria, were transferred to Germany for 18 months where he was involved in training U.S. troops near the Czech border during the height of the cold war. Upon returning to the states in 1957, he began his teaching career at Granite High School with his close friend, LaVell Edwards. He then moved to Granger High School where he was the head baseball coach and assistant basketball coach. Later he moved to West High where he became the head basketball coach. He eventually led the West High Panthers to the finals of the State Championship. While coaching and teaching at West High, Steve also earned his master's degree. In 1967 he was hired as the assistant basketball coach at the University of Oregon. During that time he also coached the freshman team where they won 20 out of 21 games. Steve earned his doctorate in 1969 and was hired at BYU as a Professor of Health Sciences where he worked for over 43 years. During his last few years at BYU, he was actively involved as an advisor to the BYU Women's Basketball Team. In 2009 Steve was inducted into the Utah Sports Hall of Fame. He was considered an important influence to coaches and players alike. Steve has always enjoyed the teaching and coaching of students and players. His abilities and enthusiasm for sport and learning have touched the lives of many. Gloria and Steve enjoyed traveling and cruises, especially to far-flung places like St. Petersburg, Russia and Tierra Del Fuego, South America. His love for adventure and sport also suited him well as co-founder and board member to the Huntsman Senior Games in St. George, Utah. He was often called upon to recruit senior athletes from countries all over the world. In continuing his interest both professionally and personally in senior citizen advocacy, Steve began the highly respected Gerontology Conference at BYU that continues to this day. Steve was responsible for recruiting many experts from around the world to speak at the conference. He also served on the General Committee on Aging for the LDS Church. Steve held many other church callings throughout his life. Steve was preceded in death by his parents; brothers, Ralph and Bill; and sisters, Elaine and Wilma. Steve is survived by his wife Gloria; son, Steven (Nesconset, New York); daughter, Kara (Provo) and her three children, Wyatt (Provo), Javin (Provo), and Devin (Salt Lake City); great-granddaughter, Kiah Nicole (Provo); and special friend, Julie (Scott) Bringhurst. Funeral Services will be held Thursday, April 16, 2015 at 11:00 a.m. at the Rock Canyon Ward Chapel, 3050 North Mojave Lane, Provo, Utah 84604. Friends may call at the Berg Mortuary of Provo, 185 E. Center Street 84606, Wednesday, April 15 from 6:00-8:00 p.m. and at the church Thursday, from 10:00-10:45 a.m. prior to services. Interment will follow at the Midway City Cemetery in Midway, Utah. Condolences may be sent online at www.bergmortuary.com. The family would like to thank the staffs of Courtyard at Jamestown Memory Care and Envision Hospice for their exceptional care.

The family of Steven Warner Heiner created this Life Tributes page to make it easy to share your memories.

Send flowers to the Heiner family.