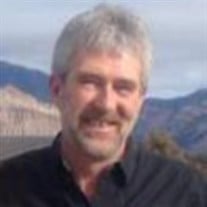 Steven Douglas Henrie, passed away at his home on September 30, 2021 at 9:45 P.M. A rare lung cancer took his life too young. He was two days away from turning sixty-three. Steve was treated at Huntsman Cancer clinic. He was given two rounds of chemo but the tumors were not responding to it. Huntsman sent him home on Hospice. His wife, Tisha was at his side and gave him such tender care. We are grateful that he is now out of pain. Steven Douglas Henrie was born at Montpelier, Idaho on October 2, 1958 to Douglas D. Henrie and Alda Vee Gardner Henrie. He was the youngest of their children. His siblings are Douglas Allen Henrie, Wendy Carrol Dahle, Gwen Daines and Kathy Hull. The family moved to Provo, Utah after the parents divorced. Vee was later married to Paul Hull. Two of Paul’s four children were joined to their family. One son, Glen was serving a mission and his eldest daughter was in California. They now had a household of teenagers. Steve’s father kept an active role in his children’s lives and his parents maintained a supporting, friendly relationship. Steve had attended grade school in Montpelier up until the fourth grade. He finished grade school in Provo Elementary and graduated from Provo High School. He loved music and learned to play the trumpet. The band teacher used him to help maintain the equipment and operate the electronics for programs. Steve married Tisha Smith on November 9, 1996. Their 25th Anniversary was coming up on November 6th. Steve and Tisha made their home in Salem, Utah. They have accomplished much together including sharing in the demolition of the home they purchased and re-built from the vision they had of their home. They created a delightful yard. He came to this earth with an inborn talent and interest in anything electrical or mechanical. He descended from a line of top electricians and engineers. Steve was born with this interest. When he was just crawling, he would go straight to electrical outlets. When he could walk, he would drag anything he could with a cord attached - his mother’s iron, a lamp, etc. She made a wooden box with a handle and attached switches, cords, lights, plugs to it to save her appliances. He married young and didn't have formal schooling beyond high school which made his future life work as a top-rated engineer all the more incredible. His story could well be titled: “The man, the myth and the legend”. In grade school, a local electrician friend of the family took Steve with him to help him wire homes. When his parent's new home in Covered Bridge Canyon suffered severe damage due to a fire, the carpenter, Orin Nielson worked with him and taught him carpentry. Steve was a self-made man with the help of men who mentored him. As a young man he was hired by Doug Clark at Clark Engineering. Doug was especially helpful in treating him like a son and tutoring him. When that company was sold, he began his career with Klemp Construction and Grating. He now held the title of “Industrial Automation Engineer.” Klemp produced and installed automated power plants. They made steel grating for the walkways at power plants, etc. The gratings had been hand-welded. Steve worked with creating automation for this job. His skill was put to work when his company sent him to Mexico to install a power plant. After completing that job, he was sent to China to install a plant there. He was then sent to Chicago to move an entire plant. That was a nine-month project. He made it home every three or four weeks to oversee and help his wife on the construction of their home. Tisha kept it going, doing much of the work herself and even doing the roofing. He was also sent to Istanbul to oversee a project. His unique abilities were not unnoticed and General Electric paid his company to loan him to them where they sent him to Germany to develop the fiber-optic windings for their windmills. Steve spent the remainder of his days as an independent Industrial Automation engineer. He was in great demand with companies who told him, "We hate it when we have to call you because we know that you are the only one that can fix it.” One company flew him to their plant to solve a problem their engineers couldn't fix. They picked him up at the airport and drove him to their plant. They suggested he look at the problem and then go to work on it the next morning. When Steve came out, he said, "I have fixed it. I can fly home in the morning." This was typical of other jobs he was called on. His loss will be felt by companies that were depending on him to correct their problems. Steve had the rare ability to quickly see right to the core of a problem. Steve and Tisha loved the out of doors and took time to go camping, boating and trail riding on motorcycles and his dune track which he built. Together they assembled their bikes from parts. He loved his truck. They were planning a repeat celebration for their 25th wedding anniversary in November. Steve will be greatly missed by family, friends, co-workers, and companies who relied on his service. He leaves a hole in our hearts. Steve is survived by his wife, Tisha Smith Henrie and combined children, Lisa, Blaine, Misty, Jake, Amanda, Weston - grandchildren - and gr. grandchildren. Funeral services will be held at 11:00 a.m., Friday, October 8, 2021 at the Knoll Park Chapel, 160 South 460 West, Salem, Utah. Friends may call from 9:30-10:45 a.m. prior to services. Condolences may be expressed at www.bergmortuary.com. Join Zoom Meeting: https://us02web.zoom.us/j/8014233244?pwd=czZCYlRLQlBVbWkxTG91Z1BtdTNuUT09 Meeting ID: 801-423-3244 Passcode: 987654

Steven Douglas Henrie, passed away at his home on September 30, 2021 at 9:45 P.M. A rare lung cancer took his life too young. He was two days away from turning sixty-three. Steve was treated at Huntsman Cancer clinic. He was given two rounds... View Obituary & Service Information

The family of Steven Douglas Henrie created this Life Tributes page to make it easy to share your memories.

Steven Douglas Henrie, passed away at his home on September 30,...

Send flowers to the Henrie family.