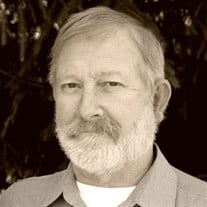 Steven George Young passed away peacefully Thursday November 10th surround by his loving family after a courageous battle with lung cancer. Steven was born on May 7, 1948 to Reo and Ruby Young in Provo Utah. He graduated from Provo High School in 1966. On March 14th, 1970, he married his sweetheart, Meridee Jones. Steven was a member of the Gents Car Club where he was given the nickname “Kunzie”. He was a man of many trades that could fix anything. His occupations included auto body, painting, running his own concrete business and working as a Millwright at Geneva Steel. However, his real enjoyment came from working in his garage, where no friend was ever turned away and no project was too difficult to tackle. Steven loved everything outdoors including hunting, fishing, camping, snowmobiling and more. The family had over 30 years of annual trips to Lake Powell where Steven could often be found fishing for Stripers up Mokie Canyon. He is preceded in death by his parents. He is survived by his wife Meridee, son Michael (Shanna) Young, daughter Marcy (Russ) Larsen, son Mark (Courtney) Young and daughter Marissa (Harold) Pacheco. He is also survived by his siblings Susan Andrew, Bryan Young and many life-long friends. Steven, and his shirt pocket full of candy, will be greatly missed by his 13 grandchildren. We would like to extend a special Thank you to Chad Snyder of IHC for endless compassion and care of our father and husband. It was always so comforting to know he was in sure great hands. Also a big big Thanks to his friends at the DiVita Dialysis center. Funeral services will be held at 11:00 a.m., Tuesday, November 15, 2016 at the Lakeview 4th Ward Chapel, 102 North 2400 West, Provo, Utah. Friends may call at the Berg Mortuary of Provo, 185 E. Center Street Monday November 14 from 6-8pm and at the church Tuesday from 9:30- 10:45 a.m. prior to services. Interment, Eastlawn Memorial Hills. Condolences may be expressed to the family at www.bergmortuary.com

Steven George Young passed away peacefully Thursday November 10th surround by his loving family after a courageous battle with lung cancer. Steven was born on May 7, 1948 to Reo and Ruby Young in Provo Utah. He graduated from Provo High School... View Obituary & Service Information

The family of Steven George Young created this Life Tributes page to make it easy to share your memories.

Send flowers to the Young family.