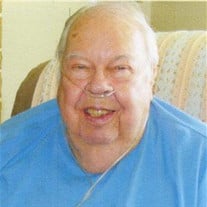 Stewart J Sorensen (Stu) passed away Friday, March 20, 2015 at the Central Utah Veterans Home in Payson, Utah, surrounded by his loved ones. Stu was born in Cedar City, Utah, October 20, 1930 to Sterling and Iona Sorensen. His birthday (10-20-30) was easy to remember. He lived his first seven years in Tropic, Utah. The family then moved to Orem, Utah. He had a happy childhood living on a farm, working at the SCERA as a coat check and a lifeguard, and carousing with his friends. He graduated from Lincoln High. He was drafted into the Army during the Korean Conflict and served as a Corporal stationed in Germany. When Stu returned he began his career working for Standard Oil in the Zion area and soon became a station manager assigned to several different locations. It was there that he spotted his first love, LaVerl Shakespeare. They were sealed in the St. George Temple November 12, 1954. They eventually moved north and settled in Provo where he managed service stations and raised two children, Larry and Shelly. He was a very proud and wonderful father. People loved coming to Stu’s station. They knew that they would be treated fair, would laugh and have a good time. 1982 was a year of change as LaVerl passed away and a career change was made. He accepted the position of head custodian for Alpine School District. He finished his working years at Hillcrest Elementary in Orem, Utah. November 2, 1983, he married his second love, Sharee Thomas. They enjoyed many happy years travelling and enjoying their combined families. He had a testimony of the gospel and served in many positions in the LDS church. He was a dedicated home teacher. Stu will be remembered for his jovial personality, patriotism, deep love for family and friends, his example of hard work and honesty, and cheerful endurance to the end. He was preceded in death by his parents; sister, Lola; wife, LaVerl; and infant son, Scott. He is survived by his wife, Sharee; son, Larry (Judy) Sorensen; daughter, Shelly (Mark) Seastrand; sister, Wilma Stewart; and his and Sharee’s grandchildren and great-grandchildren. Funeral services will be held at 11:00 a.m., Friday, March 27, 2015 at the Provo Peak 6th Ward Chapel, 1456 East 300 North, Provo, Utah. Friends may call at the Berg Mortuary of Provo, 185 East Center Street, Provo, Thursday, March 26 from 6-8:00 p.m. and at the church Friday from 9:30-10:45 a.m. prior to services. Interment will be held at East Lawn Memorial Hills Cemetery. Condolences may be sent online at www.bergmortuary.com.

The family of Stewart J Sorensen created this Life Tributes page to make it easy to share your memories.

Send flowers to the Sorensen family.