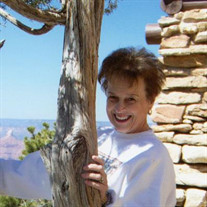 Susan Carr Hopper Doty, left her earthly home to join her eternal companion on April 9, 2016. She was surrounded by her loving family. Susan was born on June 28, 1939 in Schenectady NY, to Olga Butler and Jack Hicks Hopper. She attended BYU, and later graduated from Idaho State University with a degree in Education. She was married to George Edward Doty on August 23, 1960 in the Salt Lake City Temple. During their marriage they lived in Pocatello, Idaho; Walnut Creek and Concord, California; Potomac, Maryland; Englewood, Colorado and Provo, Utah. Together they raised 6 children, with 2 more adopted from Russia after her husband’s death in November of 1993. She has 22 grandchildren, 5 great-grandchildren, and many other children who call her “Gramma”. During her life she was a devout member of The Church of Jesus Christ of Latter-day Saints. She was always a good example of faithfulness, service, integrity, unconditional love, charity, selflessness, kindness, and an ability to forgive. She was a taxi driver, maid, therapist, volunteer, barber, best friend, mentor, teacher, coach, cook, nurse, secretary, hair stylist, doctor, referee, veterinarian, and peacemaker, but the thing she did best was being a mother. While her kids were growing up she worked as an In-Home Daycare Provider, so she could be at home for her children. She became an Occupational Therapy Assistant (COTA), later in life, after going back to school to get another degree. She was preceded in death by her beloved husband, parents, brother Robert, daughter-in-law Krista, and grandson Benjamin. She is survived by her children, Sonya M Doty; Bethany L Vigil (Walter); David H Doty (Kate); Preston J Doty (Kelly); Kevin A Doty (Tanya); Rachel D Olsen (Chad); Kate Doty; and Alex Doty (Cassy); her sister June Hymas (Scott); brother John Hopper (Jeanne); sister-in-law Kay Hopper; brother Richard Hopper (Cristina); brother David Hopper (Peggy), Marji Hopper (Neil Zieger); and grandchildren Domonique, Erin (Calyb), Nicholas (Danae), Dylan, Stevoni, Nathan, Jack, Brooklyn, Elizabeth, Lalie, Samuel, Ashley, Tierra, Parker, Kaitlin, DJ, Avery, Makaila, Max, Zoey and Quinn; and great-grandchildren Jocelyn, Adrinna, Bentley, Skylar, and Jett. Memorial services will be held at 11:00 a.m., Friday, April 15, 2016 at the Grandview 18th Ward Chapel, 1260 West 1150 North, Provo, Utah. Friends may call at the Berg Mortuary of Provo, 185 East Center Street, Thursday, April 14, from 6:00-8:00 p.m. and at the church Friday, from 9:00-10:30 a.m. prior to services. She will be buried with her husband at Utah Veterans Memorial Park Cemetery. Condolences may be expressed to the family at www.bergmortuary.com. Her family wants to thank everyone who loved their mother and helped with her care over the years. She considered her family and her friends among her greatest blessings. In lieu of flowers, please consider a donation to the George Edward Doty Memorial Fund which provides Christmas gifts for less fortunate children. You can send donations to: P.O. Box 1468 Provo, Utah 84603

Susan Carr Hopper Doty, left her earthly home to join her eternal companion on April 9, 2016. She was surrounded by her loving family. Susan was born on June 28, 1939 in Schenectady NY, to Olga Butler and Jack Hicks Hopper. She attended BYU,... View Obituary & Service Information

The family of Susan Carr Hopper Doty created this Life Tributes page to make it easy to share your memories.

Send flowers to the Doty family.