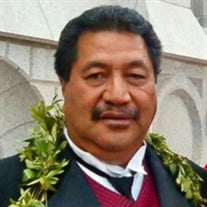 Ta’ani Talanoa Fuka Folaumoeloa, known by many as Noa, passed away on October 2, 2021. He was born on January 2, 1951 in Vaotu’u, Tonga to his parents Sione and Ma’ata Palepale Folaumoeloa. Noa was one of 10 siblings: Tohi Maile (deceased), Sefesi (deceased), Mele Finau (deceased) (Sione). Liliola (deceased), Viliami (deceased) (Lesieli), Sela (deceased), Paki (Veni), Ikavalu (Mele) Folaumoeloa, Remer (Siano) Williams, and Keleni (Roy) Rogers. Noa attended school in Tonga. After his graduation he wanted to continue his education and came on a student Visa sponsored by his cousin Akilisi to the LDS College in Salt Lake City, Utah. Noa married Jolene Griffin in 1979. Together they had 4 children: Stephanie Akalisi Petersen (Mark), Kristina Ma’ata Roberts (Riley), Alan Sione Folaumoeloa (Talya), and Jeanne Ruth Wing (Kevin, deceased). They later divorced. Noa was very proud of his six grandchildren: Zoei, Talanoa, Siosefa, Maile, Joni, and Gracei, and they brought him much joy and happiness. Noa lived in Utah for the majority of his life. He had many friends and relatives that he enjoyed spending time with. He liked being his own boss and had many ventures including a landscaping/rock wall company and driving a taxicab during the Olympics when they were held in Utah. As Noa’s health began to fail in 2017, he moved in with his daughter Kristina and Riley Roberts. We also wish to thank the doctors, nurses, and aids at Orem Rehab who took good care of him where he spent the last few months of his life. We know that he has been happily reunited with his parents and siblings and he is free from the pain and suffering he endured at the end of his life. Funeral services will be held at 11:00 a.m., Saturday, October 16, 2021 at Lakeside 2nd Ward Chapel, 2530 West 200 South, Provo, Utah. A viewing will be held from 9-10:45 a.m. in the cultural hall prior to services. Noa will be laid to rest at the Provo Cemetery, 610 South State Street, with the help of Berg Mortuary. Condolences may be expressed to the family at www.bergmortuary.com.

The family of Taani Talanoa Fuka Folaumoeloa created this Life Tributes page to make it easy to share your memories.

Ta’ani Talanoa Fuka Folaumoeloa, known by many as Noa, passed...

Send flowers to the Folaumoeloa family.