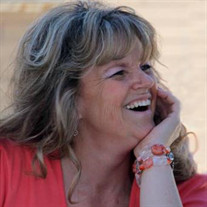 Tammra Dawn Caley Halladay, 58, beloved wife of Douglas David Halladay was mercifully released from this life April 28, 2016 in Provo. The doctors believed she had ALS. She was born August 16, 1957 in Provo, the 1st of 4 children born to David Tagg Caley and Charlotte Leftwich Caley. The family moved a lot when she was young due to her father’s employment. She was educated in Utah, Colorado, Oklahoma and Washington. Tammy would come to Utah during the summer, staying with her aunt and working at her grandmother’s nursing home. She met Doug Halladay, a handsome strapping young karate champion, on one of these visits. They were married June 24, 1976 in the Salt Lake Temple. After college, they made their home in Provo. Tammy loved children, but was not blessed with any the 1st 7 years of her marriage. Then the first of her miracle children arrived. Tom and Becky were adopted in 1983. Tammy was told she would not bear children, however, the next miracle, David was born in 1988. The doctor told her he believed in miracles but don’t expect it again, shaking his head as next Wyatt, and then Caley was born. She loved family gatherings and sponsored them on a regular basis. Family and friends will miss her conference, holiday and family dinners. She was a fabulous cook. A large group of cousins loved to spend the night (and summer) at Aunt Tammy’s. Tammy served in many callings, but teaching primary was by far her favorite. She was a beloved teacher in the church and her family. She loved to exercise with Ruth Hahn (her therapy), work in her yard (stress management) and relax in the ‘Tiki Room’. She was a stay-at-home mom until 9 years ago when she was blessed to get a job as a receptionist at VitalSmarts. She always said it was the perfect job for her. She worked with amazing, good people. We thank them for being so kind to Tammy. Tam hated the spotlight. Painfully shy in social situations, she was always more comfortable in the background. Her friends were like sisters and her sisters, her friends. She always looked out for her younger brother. He did cross her once when they were young and ran to a police officer for protection. She is survived by her husband and best friend, Doug; her children Tom, Becky, David, Wyatt and Caley and her four grandchildren Josie, Lynzi, Mya and Landon. She is also survived by her parents Dave and Charlotte Caley,Orem, and her three siblings Mindy (Ed) Halladay, Springville; Crystal (Rob) Rowley, Provo and Jeff Caley, Lyman, UT. The family would like to thank all of Tammy’s angels: her ward members, co-workers and longtime friends and family who have been so thoughtful during this difficult time. Funeral services will be held at 11:00 a.m., Tuesday, May 3, 2016 at the Cascade Stake Center, 481 East Center Street, Orem, Utah. Friends may call at the Berg Mortuary of Provo, 185 East Center Street, Monday from 6-8:00 p.m. and at the church on Tuesday from 9:30-10:45 a.m. prior to services. Interment, Provo City Cemetery. Condolences may be expressed to the family at www.bergmortuary.com.

Tammra Dawn Caley Halladay, 58, beloved wife of Douglas David Halladay was mercifully released from this life April 28, 2016 in Provo. The doctors believed she had ALS. She was born August 16, 1957 in Provo, the 1st of 4 children born to David... View Obituary & Service Information

The family of Tammra Dawn Caley Halladay created this Life Tributes page to make it easy to share your memories.

Send flowers to the Halladay family.