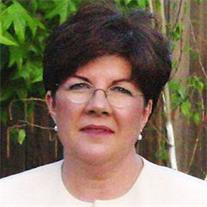 Tawna Clyde Smith was born July 12, 1956 in Landstuhl, Rheinpfalz, Germany, where her father was serving in the military. She passed away, surrounded by her family, in her home in Provo, Utah on March 22, 2012 at the age of 55 after a prolonged illness. As with everything she encountered in her life, she gracefully embraced the challenge of her illness with tenacity, self-reliance, courage, and faith. Tawna was the oldest of three children born to Norman D. and Phyllis Winkler Clyde. She was married to Douglas R. Smith on June 15, 1977 in the Salt Lake City Temple. Tawna attended public schools in Springville, graduating from Springville High School, where she served as student body secretary, and then graduated from BYU with an Associate's Degree in Nursing. She worked as a registered nurse at the Orange County Hospital in Anaheim, California supporting her husband while he finished medical school. In later years she worked as an office manager of a medical practice and served on the board of directors for Geneva Rock Products and Clyde Companies Inc. She was also the president of Cardiovascular Dynamics. Throughout her life, Tawna exemplified Christian charity and displayed a commitment to service. She was above all a devoted wife and mother. In addition to this work, she was active in her community and church. She worked in the PTA for her children's schools including serving terms as president of both the Rock Canyon Elementary and Timpview High School PTA. She was a true soccer mom and supported her children in their many activities. She was an active and faithful member of the Church of Jesus Christ of Latter-Day Saints her entire life. In the church, she served twice as a Relief Society President, and was also a teacher, Primary President, counselor in the Young Women Presidency, and counselor in the Stake Primary Presidency. Tawna enjoyed gardening, cooking, traveling, reading and book club, walking with her friends, and skiing with her family. She completed two marathons and several half marathons. She loved God and her family and often said, "Family is everything to me". She is survived by her husband Douglas and their five children and their spouses: Phillip (Nicole) Smith, Matthew (Mitra) Smith, Andrew (Analyn) Smith, Rachel (Ryan) Dunlop, and Anna (Michael) Simons, and her four grandchildren Victoria, Henry, Eamon and Asher; as well as by her parents, Norman and Phyllis Clyde, and siblings and their spouses, Cheryl (Rick) DuBose, and Lance (Heather) Clyde. Tawna's family would like to extend their many thanks to all the wonderful nurses, aids and team members from both Aspen Home Health and IHC Hospice, Dr. Jeffrey Groves, Dr. John Staheli, Dr. Norman Foster (U of U), and Dr. Keith Josephs (Mayo Clinic Rochester, Minnesota). The family would also like to thank Tawna's many friends for their service and support. Friends are invited to visit the Berg Mortuary at 185 East Center Street in Provo on Thursday, March 29, 2012 from 6:30 pm to 8:30 p.m. A funeral service will be held at the LDS Edgemont South Stake Center at 2950 North Canyon Road in Provo at 11:00 a.m. on Friday, March 30, 2012. Friends may also visit with the family from 10:00 a.m. to 10:45 a.m. before the service begins. The interment will follow at the Springville Evergreen Cemetery, 1997 South 400 East, Springville, Utah. In lieu of flowers, donations may be made in Tawna's name to the CurePSP foundation at https://give.psp.org.

Tawna Clyde Smith was born July 12, 1956 in Landstuhl, Rheinpfalz, Germany, where her father was serving in the military. She passed away, surrounded by her family, in her home in Provo, Utah on March 22, 2012 at the age of 55 after a prolonged... View Obituary & Service Information

The family of Tawna Smith created this Life Tributes page to make it easy to share your memories.