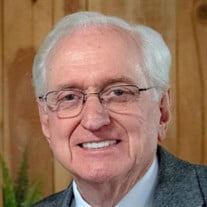 Ted Collins Hindmarsh was born May 9, 1940 in Provo, Utah to Vivian Collins Hindmarsh and Fern Johnson. Ted grew up in Provo and graduated from Provo High School, where his love for journalism and writing began as editor of the school paper. He also served as president of the seminary council. He graduated from Brigham Young University with BS and MA degrees. Ted married Shirlene Rasmussen May 20, 1960. Ted was active in scouting most of his life. He was an Eagle Scout, scout master several times, and recipient of the Silver Beaver Award. His entire 40-year career was spent at BYU in administration and as an adjunct faculty member teaching in the College of Communications. Ted served in numerous church callings throughout his life including high councilor, bishop (twice), and counselor in a BYU stake presidency. Ted and Shirlene served as Nauvoo Temple missionaries in 2011, and he spent 12 years as a worker in the Provo Temple. Ted and Shirlene created and maintained a beautiful yard and grow box garden. He loved building and was skilled in woodworking. He was gifted with words and writing was his passion. He authored six published books, several short stories, and countless verses and poems. Ted is survived by his devoted wife, Shirlene; his five children, Shaunna (James) George of Provo, Teri (Rich) Stucky of Heber, Todd of Provo, Scott (Simone) of Orem, Tom (Greta) of Vineyard; a sister, Mary Barrus. He is known affectionately as Gramps to his 20 grandchildren and 18 great-grandchildren. Due to COVID-19 restrictions, attendance will be limited. Masks and social distancing required at all services. Funeral services will be held at 11:00 a.m., Monday, October 12, 2020 at the Grandview South Stake Center, 1122 Grand Avenue, Provo, Utah. Friends may call at the Berg Mortuary of Provo, 185 East Center Street, Provo, Utah on Sunday, October 11 from 6-8:00 p.m. and at the church Monday from 9:30-10:45 a.m. prior to services. Interment, Eastlawn Memorial Hills. You are invited to access the live stream of services here: http://mywebcast.churchofjesuschrist.org/56223. Condolences may be expressed at www.bergmortuary.com.

Ted Collins Hindmarsh was born May 9, 1940 in Provo, Utah to Vivian Collins Hindmarsh and Fern Johnson. Ted grew up in Provo and graduated from Provo High School, where his love for journalism and writing began as editor of the school paper.... View Obituary & Service Information

The family of Ted Collins Hindmarsh created this Life Tributes page to make it easy to share your memories.

Send flowers to the Hindmarsh family.