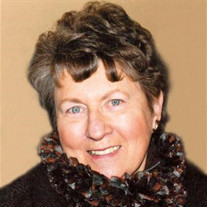 Terrie Ann Hanley of Provo, Utah, passed away peacefully on Friday, surrounded by family. She lived an exciting life, eschewing the small town of Leicester, New York, to find the college farthest away from home where she could study international relations. So off to Arizona State she went without a care or a car. Her time out west continued as she moved to Santa Monica, California, where she discovered beaches, burritos, and her dashing husband, a pilot who came to her aid as she fended off an unwanted suitor in a hotel bar. David T. Hanley walked Terrie to her beloved 1965 Mustang to ensure her safety and secure her phone number. They married on March 21, 1970, in her hometown of Leicester. Terrie and David were parents to four children, and spent most of their time in or near Lake Forest, California. Terrie was always engaged in the lives of her children, carting them to 5am swimming and far away cheer competitions, and attended hundreds of concerts and plays. Her children were the focus of her life, and she saw her grandchildren as the fruit of that effort. A creative spirit, Terrie found joy in the decorative arts from a young age. As a little girl in the 1940s, she designed dresses for paper dolls she found in girls magazines. She toiled away at her desk, designing dresses and mailing her designs off to various magazines, where she won contests and saw her designs published. Her love of fashion continued as she came of age in the fashion world of the 1960s, and found herself spending her time and her earnings as a buyer at a computer company on fabric and patterns to create that perfect look. After her marriage she continued to design, making clothes for her children and working tirelessly each fall to make beautiful items to sell at boutiques, earning funds for special Christmas gifts for her family. Terrie’s spiritual journey took her to many Christian churches. When her husband felt a pull to return to the Church of Jesus Christ of Latter-day Saints, she at first resisted, then reluctantly came to church, but sat on the steps outside. The bishop sat and talked with her on the steps, then returned to David, saying “Dave, take your wife home and don’t come back until she wants to be here!” When Terrie, David and the kids returned later that day, the bishop gave David a stern look from the pulpit. She had changed her mind over lunch that day, and decided to be open to the Mormon faith. Three weeks later, as Terrie drove and contemplated what her missionaries had taught her, she heard a voice tell her that this was the right choice for her and for her family. The very next week she was baptized, and she and her husband were sealed for time and all eternity on their 10th wedding anniversary in the Los Angeles LDS Temple. Terrie remained faithful in the LDS Church throughout her life, serving in various callings, including Sunday school teacher and Relief Society president, and served a three-year, full-time mission at the Family History Training Center in Provo, Utah. Terrie was born on May 18, 1939, in Sonyea, New York, the daughter of John and Elinor Welch. She lived most of her life in the southern California cities of Santa Monica, Los Angeles, Mission Viejo, and Lake Forest; then moved to Provo, Utah, when her husband retired as a pilot for American Airlines in 1995. Terrie is survived by her children Celeste (Jeff) Lund, Denise Scheib, Tracy (Rob) Furness, and David (Maran) Hanley, and many grandchildren and great grandchildren. She is preceded in death by her husband David, her parents John Kehrer Welch and Elinor Alberta Graff Welch, and her son-in-law Wally Scheib. Funeral services will be held at 11:00 a.m., Tuesday, November 10, 2015 at the Oak Hills 5th Ward Chapel, 1960 North 1500 East, Provo, Utah. Friends may call at the church from 10-10:45 a.m. prior to services. Interment, Provo City Cemetery. Condolences may be extended to the family at www.bergmortuary.com.

Terrie Ann Hanley of Provo, Utah, passed away peacefully on Friday, surrounded by family. She lived an exciting life, eschewing the small town of Leicester, New York, to find the college farthest away from home where she could study international... View Obituary & Service Information

The family of Terrie Ann Hanley created this Life Tributes page to make it easy to share your memories.

Send flowers to the Hanley family.