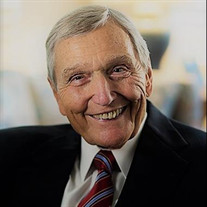 Dr. Thales Haskell Smith, age 95, passed away September 11, 2018 from causes incident to age. He was a beloved husband, father, brother, and son whose life was distinguished by devotion to duty and by constant care for others: his family, his patients, his colleagues. Thales was born April 5, 1923 in Monroe, Utah to Arthur Bennion and Edna Willis Smith, parents who taught him to work hard and to appreciate the beauty of the natural world. Thales loved his hometown and never forgot the difficult but simpler times of life during the depression. He began violin lessons at an early age and, with his older brother Willis, played in the award-winning South Sevier Orchestra. When their parents temporarily left Monroe while their father worked as an agent for the Farm Securities Administration, Thales and Willis moved to Provo for the purpose of furthering their musical training. Thales took up the viola and ultimately became an accomplished musician. He enjoyed playing in string quartets throughout his life, and he was later a founding member of the Utah Valley Symphony. Thales graduated from Provo High School and subsequently studied at the University of Utah. But after his younger brother Clair died from a treatable illness, he made the decision to attend medical school. At the onset of World War II he joined the Navy, but his active duty was deferred after he was accepted into the Temple University Medical School in Philadelphia. While there, Thales had opportunities to observe medicine in several specialties; however, he particularly enjoyed working with children and chose to become a pediatrician. He finished his residency at St. Christopher’s Children’s Hospital in Philadelphia while serving as head resident and chief of pediatrics. In 1946, during a brief break from medical school, he worked at Dee Memorial Hospital in Ogden, Utah. There he met a beautiful nurse from Brigham City, Charone Hellberg. Thales and Charone fell in love, and on June 7, 1947 they eloped and were married by a justice of the peace in Coalville, Utah. They were later sealed in the Salt Lake Temple. Thales and Charone returned to Philadelphia where Thales concluded his medical training and Charone worked as a nurse until the birth of their first child. They were later blessed with six additional children. Between 1952 and 1954, Thales was on active duty at the Norfolk Naval Station Hospital in Virginia. Despite having received attractive administrative offers from the Navy and from Temple University, he chose to practice medicine. In the autumn of 1954, he and Charone moved their family to Provo where Thales opened a solo practice in pediatrics. As only the second pediatrician south of Salt Lake City, he was extraordinarily busy: on call every night, making morning and evening rounds at the hospital, frequently making house calls. Despite the demands of his schedule, his manner was always compassionate and gentle when treating his patients-and reassuring worried parents. Thales served on the board of Utah Valley Hospital for many years, helping to open the first pediatric unit and intensive care nursery. In time, he joined with three other physicians to establish Provo Pediatrics, the forerunner of Utah Valley Pediatrics. In 1975, Thales was asked by leaders of The Church of Jesus Christ of Latter-day Saints to be a member of the first Intermountain Health Care Board of Directors. He served for nearly 20 years and was instrumental in the design and development of Primary Children’s Medical Center. After he retired from full-time practice, Thales and Charone served an eighteen-month medical mission to Albania between 1992 and 1993. He and Charone made a lasting contribution to medicine and to humanitarian care in Albania where Thales taught in the medical school at the University of Tirana and Charone served in a pediatric orphanage. He enjoyed almost 50 years of association with cherished colleagues in his medical practice, and even after retiring, he provided occasional medical care for children of migrant families at the Mountainlands Clinic until he was 91. While his long career was hallmarked by his exceptional ability as a physician and administrator, he is primarily remembered for his unfailing kindness to all who came within the compass of his medical practice and personal ministry. After the death of his beloved Charone in 2007, Thales married Ann Wiest Bushnell in 2011. Ann’s companionship blessed the final chapter of his life, and they spent a very happy seven years together. Thales is survived by his wife Ann; a sister Marie (Oscar) Anderson; six children: Thales Jr. (Laura); Sandy (Steve) Francom; Stephanie (Lee) Berge; Steve (Klyss); Lisa (Jeff) Elder; and Greg; 25 grandchildren and 70 great grandchildren. He was preceded in death by his parents, three brothers, his wife Charone, and daughter Pat. Funeral services will be held at 11:00 a.m., Monday, September 17, 2018 at the Pleasant View 6th Ward Chapel, 2445 North Timpview Drive (650 East), Provo, UT. Friends may call at the Berg Mortuary of Provo, 185 East Center Street, Sunday, September 16 from 6-8 p.m. and at the church from 9:30-10:45 a.m. prior to services. Interment will be in East Lawn Memorial Hills. Condolences may be expressed at www.bergmortuary.

Dr. Thales Haskell Smith, age 95, passed away September 11, 2018 from causes incident to age. He was a beloved husband, father, brother, and son whose life was distinguished by devotion to duty and by constant care for others: his family, his... View Obituary & Service Information

The family of Dr. Thales Haskell Smith Sr. created this Life Tributes page to make it easy to share your memories.