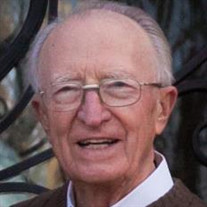 Theodore Eugene Morgan, beloved husband, father, and grandfather, passed away peacefully at his home in Provo, Utah on Tuesday, December 23, 2014. He was 88 years of age. Ted was born in the small rural town of Albion, Nebraska on July 23, 1926 to Carroll Eugene and Ferne Lynn Morgan. Shortly after the death of his father in 1939, Ted moved with his mother and sister to Provo, Utah. He married his high school sweetheart, Yvonne Farr, in the Salt Lake Temple on December 17, 1947. Ted attended Provo High School where, during his senior year, he was named Student Manager by the faculty, an assignment that presaged the remainder of his life as a servant-leader. Following high school, Ted entered the armed forces and served in Italy during World War II. Upon completion of his military service, he returned to Provo where he completed his education, graduating from Brigham Young University in 1950. Ted began his career with the JCPenney Co. in Casper, Wyoming, a career that spanned thirty-six years and took the family from Casper to Independence, Missouri, and eventually back home to Provo, Utah. While in Casper, Ted and Yvonne welcomed three sons to the family – Ted, Stuart, and Paul. In 1963 the family relocated to Independence, Missouri where Ted worked on the district staff and eventually became a store manager. While in Independence, he was called to serve as bishop of the newly-created LDS Independence 2nd Ward, a position in which he served for seven years. An opportunity to return home to Provo came in 1973 as Ted was named manager of the Provo and later Valley Fair (Salt Lake City) JCPenney stores. Following his retirement, Ted was called to serve again as bishop, this time to the BYU 32nd Ward. Upon conclusion of his assignment as bishop, he and Yvonne were called to serve a full-time mission to the Laotian community of Oakland, California. Throughout his life Ted has been active in The Church of Jesus Christ of Latter-day Saints, serving as bishop, high councilor, young men’s president, counselor in a stake presidency, full-time missionary, temple worker, and for 17 years as stake patriarch. For the 11 years prior to his death he served as a sealer in the Provo Utah Temple. Throughout his life Ted has been an avid gardener; many neighbors and friends have enjoyed the bounties of that passion and been blessed by his quiet and gentle service. Family history, fishing, golf, BYU sports, and grandkids – especially grandkids – head the list of his hobbies. Throughout his life, his greatest love has been Yvonne; just over a week ago they celebrated their 67th wedding anniversary. Ted leaves behind a legacy of friendship, service, dedication, and love. He is survived by his eternal companion, Yvonne, sons Ted (Shanna), Stuart (Kathryn), and Paul (Loring), nine grandchildren and fourteen great-grandchildren. Funeral services will be held at 11:00 a.m., Tuesday, December 30, 2014 at the Provo Utah Grandview South Stake, 1122 Grand Ave., Provo, Utah. Friends may call at the Berg Mortuary of Provo, 185 East Center, Monday, December 29, from 6-8:00 p.m. and at the church Tuesday, from 9:30-10:30 a.m. prior to services. Interment, Provo City Cemetery. Condolences may be sent online at www.bergmortuary.com.

Theodore Eugene Morgan, beloved husband, father, and grandfather, passed away peacefully at his home in Provo, Utah on Tuesday, December 23, 2014. He was 88 years of age. Ted was born in the small rural town of Albion, Nebraska on July 23,... View Obituary & Service Information

The family of Theodore Eugene Morgan created this Life Tributes page to make it easy to share your memories.