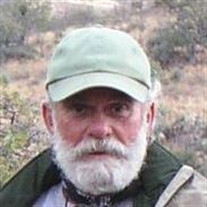 Thomas W. Berg, 77, died on July 17, 2019 in Green Valley, Arizona. Born August 3, 1941 in Provo, Utah to Max W. Berg and Miriam Cochran Berg, he grew up in Provo, Utah and attended Provo Schools, graduating from Provo High School in 1959. He then went on to graduate from the San Francisco College of Mortuary Science, in the top 10% of his class, and began working in the family business, Berg Mortuaries. He married Barbara Schenck in 1963. Together they had two sons, Thomas Wyman Berg, Jr. and Joshua Russell Berg. They later divorced. He was also married to Sheri Whitby, whom he later divorced. Tom retired from the mortuary in 1975, and was an assistant supervisor at Bridges at the Solar Plant before developing several businesses over the years, including The Import Warehouse, and The Red Coyote clothing store in Provo. Following several years in the clothing business, Tom retired to Green Valley, Arizona with his companion of more than 20 years, Debbie Waycasy. Debbie died on July 5, 2017. He then married Mary Lou Lamplot on September 3, 2017. They had been friends since 2008 and became great companions. He was a member of The Church of Jesus Christ of Latter-day Saints. Tom was also a former member of the Provo Rotary Club and served 12 years in the Army National Guard of Utah. Tom is survived by his wife, Mary Lou of Green Valley, Arizona; sons, Wyman (Rene) of Oakley, Utah and Josh of Salt Lake City, Utah; 2 grandchildren, Alex and Halle; brother, Carl Berg of Provo, Utah; and several loving nieces. He was preceded in death by his parents. Thoughts, memories and condolences may be sent to the family at www.bergmortuary.com. Berg Mortuary, 185 East Center Street, Provo, Utah. (801)373-1841

The family of Thomas W. Berg created this Life Tributes page to make it easy to share your memories.

Send flowers to the Berg family.