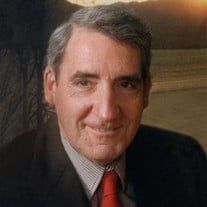 Thomas Sterling Taylor, Jr. passed away Thursday, April 28, 2016 in Provo, Utah. He was 91 years old. He was born May 19, 1924 in Provo to T Sterling Taylor and Nellie Todd Taylor. He was raised in Provo and San Francisco. Following graduation from Galileo High School in San Francisco, he enlisted in the Navy and served in the Pacific Theater as a radio operator during World War II. After his discharge from the Navy, he enrolled at Brigham Young University where he was a member of the university tennis team. It was at BYU that he met his eternal companion, Myra Elizabeth Hansen. Tom and Myra were married in the Salt Lake City Temple on September 10, 1947. Following his graduation from BYU, Tom attended and graduated from the University of Utah Law School. Tom and Myra returned to Provo where he practiced law for over 40 years. He was a Provo City Attorney for several years, but was in private practice during most of his law career. He was a member of Jaycees, Kiwanis and Sons of Utah Pioneers. He also was on the Board of Directors for United Cerebral Palsy in Utah, for many years. He believed in the importance of giving back to your community. Tom was an active member of The Church of Jesus Christ of Latter-day Saints. He served in many positions during his lifetime. One of his favorites was serving in a BYU Bishopric. Tom and Myra served a mission in London England. He also served as an ordinance worker in the Provo Temple for many years. Tom is survived by his daughter, Anne Kallas, Orem, six grandchildren and 10 great-grandchildren. He was preceded in death by his parents, his wife, Myra, son, Mark, son-in-law, Terry Kallas, sisters, Vesta Taylor and Jane Henderson, and a great-granddaughter, Ashlyn Taylor Kallas. The family would like to thank Envision Hospice Care for the kind and tender care they have given dad during the past year. We would also like to thank the staff at Cove Point for the care they have given to Dad during the past few months. Funeral services will be held at 11:00 a.m., Monday, May 2, 2016 at 11:00 a.m. in the Oak Hills 2nd Ward Chapel, 925 East North Temple Drive, Provo, Utah. Friends may call at the church from 10-10:45 a.m. prior to services. Interment will be at the Provo City Cemetery. Condolences may be expressed to the family at www.bergmortuary.com.

Thomas Sterling Taylor, Jr. passed away Thursday, April 28, 2016 in Provo, Utah. He was 91 years old. He was born May 19, 1924 in Provo to T Sterling Taylor and Nellie Todd Taylor. He was raised in Provo and San Francisco. Following graduation... View Obituary & Service Information

The family of Thomas Sterling Taylor, Jr. created this Life Tributes page to make it easy to share your memories.