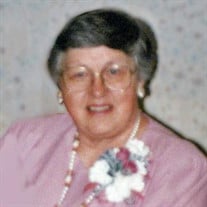 Thora Peterson Bills, 89, passed away on Friday November 13, 2020. She was born on August 21, 1931 to Charles Abner Peterson and Maryann Petrea Olsen in Provo, Utah. Thora was full of life and loved her family. The seventh of fifteen children. She had a strong spirit and an exceptional work ethic developed while working on her family’s farm. As a young woman, Thora loved sports. She played catcher for several city league softball teams as well as the Lincoln High School girls softball team. She also enjoyed riding her horse around Provo and Orem. Thora served as a missionary for The Church of Jesus Christ of Latter-day Saints in Denmark. While there she had the unique opportunity to serve as companions with her older sister, Phyllis. After returning home, Thora married Osmer K. Bills in the Salt Lake Temple in January of 1960. Together they had two children, Jaqueline Elaine Poulter and Rodney George Bills. Thora and Osmer purchased a historic home on 400 South in Provo, where she enjoyed renovating the home and working in her large garden. Thora attended USU and eventually earned her bachelor of science in special education from BYU. She spent the majority of her career working at the Utah State Developmental Center, both as an educator and as a manager of the residence halls. Thora was always up to some kind of mischief, from playing practical jokes on her nieces and nephews to starting water fights with her family. Her ability to find a connection with others was truly impressive, and most of those who spoke with Thora would leave knowing that somehow they were connected through a shared relative or acquaintance. After retiring from the State Developmental Center, she continued working and managing various assisted living facilities. Retirement also allowed her to indulge in a passion for world travel; going on safari in Africa as well as touring Fiji, China, and Europe. Thora was preceded in death by her parents, 12 of her siblings, her husband, and her sister-in-law Elaine V. Bills, with whom she shared a special bond. She is survived by her sister Buena Moore and brother Dale Peterson, her 2 children, 8 grandchildren: Ryan Poulter, Eric Poulter, Matthew (Rebecca) Bills, Madison (Miguel) Gutierrez, Mark (Mikaela) Bills, Alex, John and Gartee Bills, as well as one great-granddaughter: Adelaide Bills. Thora will be missed for her strength, her love of the church and the scriptures, as well as her proficient gardening skills. She was happiest when working in the soil and making things grow. Mom, we love you and will miss you in our lives. Condolences may be expressed at www.bergmortuary.com.

Thora Peterson Bills, 89, passed away on Friday November 13, 2020. She was born on August 21, 1931 to Charles Abner Peterson and Maryann Petrea Olsen in Provo, Utah. Thora was full of life and loved her family. The seventh of fifteen children.... View Obituary & Service Information

The family of Thora Peterson Bills created this Life Tributes page to make it easy to share your memories.

Send flowers to the Bills family.