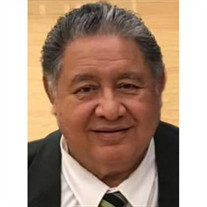 Toalei Alisa Ralph Toelupe was born on August 30, 1951 in Leone, American Samoa to his goodly parents: Tava’etoto Sagapolutele Le’oso of Leone, and Ralph Lafi Alisa Toelupe of Malie, Samoa. His maternal grandparents are Kolone-o-Amerika Hunkin and Toamalama Sagapolutele Le’oso. His paternal grandparents are Kuka Tuatagaloa and Alisa Fanene Toelupe. Toalei was educated at Church College of Western Samoa, then graduated from Mapusaga High school, American Samoa. He Served an LDS mission in the Samoa Mission for two years, completed in 1972. After returning home from his mission, he worked at the Manpower Office with the Government of American Samoa. Two years later, he met Liuileafaga Lemau and were married on July 23, 1975, in Fagatogo, American Samoa. A couple of years later, they moved to Laie, Hawaii, and were there sealed at the Laie Hawaii Temple on December 14, 1979. Toalei continued his education at BYU Hawaii while he worked at the Polynesian Cultural Center. It was there at PCC--a decade earlier—he accompanied his parents Lafi and Tava’e Toelupe who supervised the labor missionaries from Samoa and Tonga in building the structures of PCC. Toalei worked at PCC until his friend Steve La’ulu asked him to work with him at the Tihati Productions in Honolulu--a job he absolutely looked forward to every day to enjoy. In 1993 their family moved to Provo, Utah, where he later worked for the State of Utah, Department of Justice as a counselor to the juveniles. Toa enjoyed working and helping the youths turn their lives around, and leave the system. He worked for the State for 15 years until he retired in 2014. His co-workers provided an elaborate decorated luau in honor of his retirement. In January, 2018, the Toelupe’s were called on a service mission at the MTC in Provo until the end of 2019. They appreciated working with the missionaries as it made them feel much younger again. Toa enjoyed traveling, spending time with family (be it just partying or family reunions), chilling with friends, golfing, playing guitar, playing drums, translating, and teaching and leading choirs. He enjoyed singing--with a voice as big as the sea. He served in several church callings including Seminary Teacher, Sunday School teacher, high counselor, choir director, Bishop, Temple worker for 16 years, and Stake Temple and Family History Consultant. When he was a bishop, his wife asked him, “What’s the hardest thing for being a bishop?” He said, “I wish I was rich so I can help every single person that comes in for financial relief.” He was so full of love for his ward members. Toa was preceded in death by his parents: Lafi and Tava’e Toelupe, his Le’oso grandparents, his Alisa Toelupe grandparents, brother Seti Le’oso, brother Sio Hunt, and sister Florida Toelupe Maluia. Toa is survived by his wife of almost 46 years--Liu Lemau Toelupe, his brothers: Robert (Sinuu) Toelupe, Packard K.Toelupe, and Duane (Brandy) Toelupe; sisters: Leah (Peter) Su'apaia, Ellen Toelupe; his sons: Scirocco (Meaalii) Toelupe, Shennandoah (Hine) Toelupe, Robert LM (Bethany) Toelupe; and daughters Xanadu Toelupe, and Chantilly (Sione) Toutai. He has 13 grandchildren: Toalei, Bronx, Toamalama, Blaise, Brooklyn, Tafa’ilagi, Talae, Tia, Bailey, Tusani, Tami, Tama, and Bryson Toelupe. He also leaves behind his aunties: Leah Afemata, Ireen Stone, Faasei Tago, Masina Ava; and Uncle Mataumu Alisa. Since his departure from COVID-19 on December 3, 2020, in Provo, Utah, we have been so touched and very grateful with the myriads of phone calls, texts, voicemail messages, and FB posts, on interactions with him, and the expressions of love and sympathy. We’ve been well fed with the never-ending supply of sustenance. Thank you for the services provided to him by the Utah Valley Hospital staff, University of Utah Kidney Transplant Team, DaVita Utah Valley staff, and all other professionals that have cared for him. Funeral services will be held at 12:00 noon, Wednesday, December 9, 2020 at the Provo 10th Ward Chapel, 1625 South Slate Canyon Drive, Provo, Utah. Interment will be at the Provo City Cemetery, 610 S State Street, Provo, UT 84606. Due to COVID-19, attendance is limited, and social distancing enforced. Condolences may be expressed to the family at www.bergmortuary.com. Service will be live streamed at https://us02web.zoom.us/j/81822073071?pwd=VGt4anVVbVkyWE10TUdRM2dsSXdXZz09 (This video will not be available after the service is over)

The family of Toalei Alisa Ralph Toelupe created this Life Tributes page to make it easy to share your memories.

Send flowers to the Toelupe family.