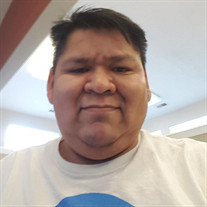 Travis Curtis Jim was born on July 13,1974 in Shiprock, NM to Laverne and James Jim. He passed away Tuesday, February 15, 2022. Travis was the third oldest of seven children. He lived in NM until 1977 when his family moved to Provo, UT. They moved back and forth from NM to UT until he was 9. Travis has been living in Utah since 1982. He attended Nataani Nez Elementary, Timpanogos Elementary, Sunset Elementary, Joaquin Elementary, Farrer Junior High, and Timpview High School where he graduated in 1992. Travis started many jobs but the one that jump started his first career choice was building gun safes at National Security in American Fork. He worked there a few months then left to go to work at Liberty Safes. During his time at Liberty Safes, Travis had the opportunity to help another safe company start up called Champion Safes, by organizing and implementing the assembly line. He juggled both jobs for 6 months working day and night, 6-7days a week. Travis was knowledgeable in all areas that included: grinding, welding, sanding, priming, painting, inspecting, and boxing up safes. He worked for Liberty Safes for 12 years up until his accident which caused compartment syndrome in his right arm. He returned to Liberty after a year and worked for another 8 months. Travis then decided to go back to school. He attended Utah Valley University bringing him back into his first love, drafting. Travis graduated at UVU with his Associate’s degree in Applied Science. Travis took his degree and applied to work for Axis Steel doing Structural Engineering. He worked at Axis Steel for 7 years but bounced around to a few different companies afterwards. Up until his death, Travis worked for Reliant Detailing in Lehi. Travis was not married and had no children, but he was very close to his siblings whom he helped raise. Travis was always looking out for his family and made sure their needs were met before his own. He loved his nephews whom he lived with and would care for them as if they were his. Travis has dealt with multiple challenges throughout his life and overcame every obstacle. His family claims he was very stubborn and fought through everything his way which made him the strong person that he was. Travis was preceded in death by his parents, James and Laverne Jim; sister, Dorvinia Jim; maternal grandparents, Stella Jackson and Frankie Pierce; and paternal grandparents, Olive and John Jim. He is survived by his siblings: sister, Victoria (David) Cassidy; sister, Donna (James) Blackowl; brother, Terrance (Heidi) Jim; sister, Divida (Roger) Ayze; and sister, DeVonne Jim; niece, Nicolle Cassidy; and nephews, Michael Cassidy, Dylan Cassidy, Jonathan Ayze, and James Ayze. Celebration of life will be held Saturday, February 19, 2022 from 1-3:00 p.m. at the Grandview South Stake Center, 1122 Grand Ave., Provo, Utah. A viewing will be held Saturday, February 19, 2022 from 6-8:00 p.m. at the Berg Mortuary of Provo, 185 East Center Street. Cremation will follow. Condolences may be expressed to the family at www.bergmortuary.com. In lieu of flowers, donations are appreciated.

Travis Curtis Jim was born on July 13,1974 in Shiprock, NM to Laverne and James Jim. He passed away Tuesday, February 15, 2022. Travis was the third oldest of seven children. He lived in NM until 1977 when his family moved to Provo, UT. They... View Obituary & Service Information

The family of Travis Curtis Jim created this Life Tributes page to make it easy to share your memories.

Send flowers to the Jim family.