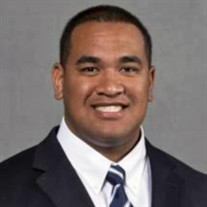 Tuihalangingie “Tui” Crichton of Provo, Utah passed away in his Provo home at 6:30 a.m. on Monday, March 29, 2021. Tui was born on November 23, 1990 in Honolulu, Hawaii and was the youngest child of Al and Sweet Crichton. Tui was raised in Provo and attended Grandview Elementary, Dixon Middle School, and Timpview High School before receiving a full-ride scholarship to play football at BYU. As a child, Tui was extremely close with his father and became known as “Big Baby” by his family because of their relationship. Tui’s father passed away when Tui was 10 years old. After his father’s passing, several influential mentors entered Tui’s life as father figures including legendary coach Fred Whittingham, his dear uncle/coach Robert Anae, and his uncle Tui Filiaga. Additional, spiritual mentors such as President Hutch Fale, Gabe Reid, and Ron Albert also became important role models for Tui—filling a void his father left during his youth and young adult years. Inspired by God and his mentors, Tui faithfully served a full-time mission in the Texas Houston South Mission of The Church of Jesus Christ of Latter-day Saints from 2010-2012. He loved Houston and the people he met there. He hoped to move back to Houston one day to open a Sweet’s Island Restaurant—the well-known island restaurant in Provo that his family owns and operates. Tui was a friend to many. He was a big man with a big heart and a big smile. He had a unique ability to connect with people and made friends with persons of all backgrounds. People were often drawn to his welcoming and friendly demeanor. No matter where he was, Tui lit up the room with his witty humor and infectious laugh. He loved to laugh with and at people—in the most endearing way. He will also be remembered for his amazing dance moves. He was always the first one on the dance floor and never shied from putting on a good show. He loved music, movies, and food. He was multi-talented: an athlete, musician, singer, and cook. Even with his many talents, Tui was humble and celebrated the successes of those around him with support and enthusiasm. He will be missed by many. Tui is survived by his mother, Sweet; older sister, Omai; elder brothers, Will and Tama; and his nephews, Tyson and Alapaki. A public viewing will be held at 1:00 p.m., Friday, April 2, 2021 at the Berg Mortuary Drawing Room Chapel, 185 East Center Street, Provo, Utah. Condolences may be expressed to the family at www.bergmortuary.com.

The family of Tuihalangingie "Tui" Crichton created this Life Tributes page to make it easy to share your memories.

Tuihalangingie “Tui” Crichton of Provo, Utah passed away in his...

Send flowers to the Crichton family.