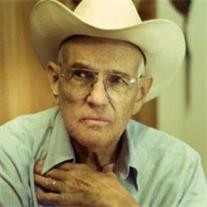 Ulysses Grant Speed passed away October 1, 2011. He was born in San Angelo, Texas on January 6, 1930. As a youth, he was fascinated with learning to ride and rope horses. Throughout high school and post high school years, he spent his summers working as a cowboy on his Uncle Boone's ranch in West Texas. Soon, he was working on other ranches, namely, the Four Sixes and the King Ranch of Texas, where he became an accomplished horse breaker. He quickly used his cowboying talents as a rodeo contestant in the bare back and bull-riding events. He continued participating in these events while at Brigham Young University and on into his marriage to Sue. When he was 18, he joined the United States Air Force for two years during the Korean War. He learned to be an airplane mechanic and continued his love for this great country throughout his life. During the next seven years, he worked as a cowhand and rodeo rider, and then completed a two and a half year Spanish-American Mission for The Church of Jesus Christ of Latter-day Saints, learning to speak Spanish fluently. When he returned from his mission, he entered the Brigham Young University where he met and married Sue Collins in 1958, in the Salt Lake Temple. He graduated in 1959, the same year as their daughter, Peggy Sue was born. He taught school for several years in Salt Lake City while living in Provo. He always had his mind on art. He said, "Having come from conservative West Texas, I really wanted to be the world's best cowboy. Yet, every time I got a chance to be around any kind of western art, I couldn't stop reading about it, looking at it and studying it." When he began sculpting his first model, he used his daughter Peggy Sue's modeling clay. That model is still in his studio. He was beginning what would become his life work and passion. He let no one know about it, except Sue. "Every time someone came to the door, I would grab my stuff and hide it." The first serious sculpture he did was in an art class at BYU. He then learned the art of bronze casting, because the costs of professional casting were prohibitive on a teacher's salary. He learned to cast with an old artist friend, Hughes Curtis, out behind Hughes' home in Springville. As he taught daily, he sculpted nights, getting little sleep, but loving his art. After seven years, he made the decision to quit teaching and continued his art career. In 1965, he joined a group of western artists, the "Cowboy Artists of America" (CAA), serving several times as president of this group. His fellow artists and collectors of his art admire not only his work ethic and art, but that he is a man of deep character and quiet faith. He has said that it's been a good life, though he admits, "sometimes I'd really rather be "cowboyin'." Grant has lived in Lindon, Utah since 1973 when they built their home there. Peggy Sue had died in 1965, the same year their son, Boone, was born. Samantha was born in the Fall of 1973. He always said that the greatest blessings in his life are his children and his grandkids, Taylor, River, Lucy and Nic. He looked forward to the time he could "hug Peggy's neck". He looked forward to the time he could meet three of his favorite patriots and heroes, John Wayne, Abraham Lincoln and Audie Murphy! After a life of devotion to family, church and country, he's able to do just that! Funeral services will be held at 1:00 p.m., Friday, October 7, 2011 at the Lindon 19th Ward Chapel, 731 East Center, Lindon, Utah. Friends may call from 11:30 a.m.-12:45 p.m. prior to services. Interment will be in the Lindon City Cemetery, 600 North 200 East, Lindon. Condolences may be sent through www.bergmortuary.com.

Ulysses Grant Speed passed away October 1, 2011. He was born in San Angelo, Texas on January 6, 1930. As a youth, he was fascinated with learning to ride and rope horses. Throughout high school and post high school years, he spent his summers... View Obituary & Service Information

The family of Ulysses Speed created this Life Tributes page to make it easy to share your memories.

Send flowers to the Speed family.