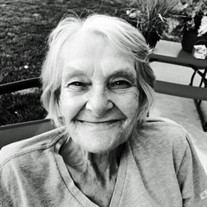 Our beautiful Mama, Grandma and Oma, Ursula Hannemann Parduhn, passed away on July 8, 2020, surrounded by family. Ursula was born in Reutlingen, Germany on the 4th of February 1944. She was the oldest of four children. She learned at a young age the value of hard work while living on the family farm. She completed her early education in Lensiedel, Germany, followed by Trade School for Culinary Arts in Crailsheim, Germany. While living in Crailsheim, Ursula met and married James B. Dirker, who was stationed with the US Army. In October 1966, Ursula made the hardest transition in her life; she moved her daughters to America. She divorced Jim and worked hard to make a life with her girls. In 1979, Ursula met and married Marc W. Parduhn. Together they had a son that she called “her baby” no matter how old he got. They later divorced. Ursula remained single the remainder of her life. Ursula was the hardest worker you could ever meet. She was employed by a small sewing factory, Barbizon, Geneva Steel, and Village Inn restaurant where she worked until she retired due to a back injury. Over the years, Ursula became a mentor to many more people than she realized. She was a pure example of love and acceptance. Ursula spent her life in the service of others. She loved everyone with her whole heart. She never met a stranger who didn’t become an instant friend. Family was the most important thing in Ursula’s life. She would do anything in her power to make sure her family was taken care of. She loved helping those in need, Rod Stewart, her animals, See’s dark chocolate almonds, bacon cheeseburgers, anything German, good friends, the coffee girls, Coca Cola in a bottle, a good Hefeweizen, the color red, roses, and lastly, her very favorite, a pack of menthol cigarettes. She also loved watching Anne of Green Gables, anything on the Hallmark channel, and singing at the top of her lungs. Ursula is survived by her three children: Elisabeth Dirker Erickson of Provo, Utah, Jeannette (Troy) Goulding of Provo, Utah and Ryan Parduhn of Greenville, South Carolina; eight grandchildren and 19 great-grandchildren; her siblings in Germany: Marianne (Gerhard) Quendt-Kurr and Manfred (Agnes) Stier. She was preceded in death by her parents, her sister, Hannelore (Heinz) Mohr, and infant twin daughters Claudia and Cornelia. Until we meet again honey buzzele (pronounced boot-sell-a)! The family invites everyone who would like to share a memory of our sweet mama to a Celebration of Life in honor of Ursula on Saturday, July 18, 2020. It will be held at Canyon View Park, near the base Provo Canyon, from 5-8:00 p.m. Condolences may be expressed at www.bergmortuary.com.

Our beautiful Mama, Grandma and Oma, Ursula Hannemann Parduhn, passed away on July 8, 2020, surrounded by family. Ursula was born in Reutlingen, Germany on the 4th of February 1944. She was the oldest of four children. She learned at a young... View Obituary & Service Information

The family of Ursula Hannemann Parduhn created this Life Tributes page to make it easy to share your memories.

Send flowers to the Parduhn family.