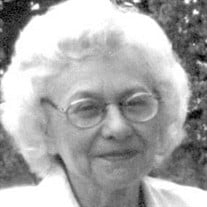 Ursula Charlotte Rehm, nee Bodungen, died at Utah Valley Regional Medical Center in Provo, Utah at 8:00 PM (Mountain Time), April 25, 2015, after suffering a stroke. Born June 14, 1924, in Dortmund, Germany, she was the third daughter (of six) of Oskar Bodungen and Karoline Bodungen, nee Moennikes. Ursula grew up in Heiligenstadt, Germany. Ursula studied medicine at Bamberg (University of Erlangen), where she also met her husband, chemistry student Guenter Rehm, of Leipzig. They were married on July 14, 1948, in Bamberg, Germany. During the difficult WWII aftermath, the couple relocated to Hamburg, where she changed her educational focus to dentistry. Ursula had three children, daughters Margrit and Gisela (now Gisele/Gigi), and son Peter. The family made summer trips to Denmark and Sweden, and Austria, Switzerland, France (& Paris), Belgium, and Holland, while still residing in Hamburg. After converting to the LDS faith, the entire family of five immigrated to the United States in June of 1963, and settled in Salt Lake City, Utah. In Utah, the first jobs both Ursula and Guenter had were as chemists for the U&I Sugar Co. Sacrificing her career goals to come to the US, she also took bookkeeping courses at the LDS Business College. In October of 1966, they moved back to New York City, and Ursula became a bookkeeper for Norcross, a greeting card company on Madison Ave. Later she did the same work for a furniture store in NYC, and after moving to Rahway, New Jersey in May of 1968, she became a bookkeeper for Acme Plating, a silver plating concern in Linden, NJ, and thereafter for an egg distribution company, Kay Foods, of Roselle, NJ. After Guenter’s massive stroke in 1974, she moved with him and Peter to Tampat. Petersburg, Florida. Ursula was a consummate scientist B always seeking information, facts, and truth. She was a perpetual student, taking an interest in the emerging field of computer science back in 1967, and taking computer courses at various colleges and universities into her seventies. Ursula was light-hearted, had an excellent sense of humor, and enjoyed laughing and life more than most. She was as opinionated and passionate in intellectual arguments, which she enjoyed immensely, as she was vivacious and charming in social situations. Ursula was also good-natured, sweet, and loving with family, and had a special fondness, and skill, for dealing with small children. Most people who met Ursula never forgot her, and were invariably left with a very favorable impression. Ursula was predeceased by her husband, Richard Fritz Gnter Rehm, and her sisters Helene, Anneliese, Hedwig, and Annemarie. She is survived by her children Margrit Rehm Henson, Gisele Rehm Zeitler-Schiff, and Peter H. Rehm, and her grandchildren Michael David Henson, Torrey Robert Henson, Jamie Lynn Henson, Jennifer Lee Henson Hardin, Christie Ann Henson McWilliams; Richard Joseph Zeitler Jr., David Mark Zeitler; Sara Ann Rehm, Megan Elizabeth Rehm, Jeffrey Peter Rehm, Julia Charlotte Rehm, Amanda Michelle Rehm, Stephanie Marie Rehm, Lisa Nicole Rehm, Ryan James Rehm; and her great-grandchildren, Nicole Henson, Andrew Henson; Tyler Jay Hardin; Mason Michael McWilliams, Landon David McWilliams; Anthony James Montez. Julianna Margrit Montez; as well as her only surviving sister, Christa Bodungen Linke. The viewing will take place at the Grandview 8th Ward located at 900 West 2150 North, Provo, on Saturday May 9th, from 10 AM to 10:45 AM, and the funeral will be held immediately following at the same location at 11 AM. She will be interred at the Elysian Burial Gardens in Salt Lake City, Utah, next to her husband of 45 years, Guenter F. Rehm, immediately following. In lieu of flowers, the family would welcome donations to the memorial fund, which may be mailed to: Ursula Rehm Memorial Fund, 50 Dayton Hill Rd, Middle Granville, NY 12849.

The family of Ursula Charlotte Rehm created this Life Tributes page to make it easy to share your memories.

Send flowers to the Rehm family.