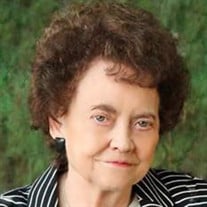 Evelyn Valene Johnson peacefully joined her husband of 56 years, Sherwin, at her Summerfield home on January 22, 2019. Valene’s life journey began on December 19, 1932, in Idaho Falls, Idaho to William and Sybil Brookbush. She was the second child after her big sister, Betty, and before little sister, Shirley. Her family found themselves in Sterling, Idaho where they owned and ran the general store, gas station, and post office. She had fond memories of the neighbors and the bell on the door ringing when one would enter. Of course the penny candy and old pop machine were the girls’ favorites! Valene graduated from Aberdeen High School, where she excelled in academics and played the clarinet in the band. The next fall she enrolled and attended BYU and later graduated in Microbiology, which was quite an accomplishment for a woman of her day. She also met and later married her life’s love, Sherwin Johnson, on September 20, 1955 in the Logan Temple. They later settled in Grandview in Provo, Utah where they built a home and thrived. Valene was proud to be a medical technologist at Utah Valley Hospital for 30 years where she rose to be supervisor of the Blood Bank. When she retired she continued to volunteer in the gift shop for 15 years. She accomplished all this while raising 3 beautiful daughters, Sherilyn, JaNay, and Michelle and holding many positions in her church. She also had the energy to have a catering business. She loved to cook and her Sunday family dinners were legendary. Her handmade Christmas sweets and creations were a highlight with her family, neighbors, and friends. Valene had a deep love for her 3 daughters, her 14 grandchildren, and 12 great-grandchildren with 2 more to arrive this spring. She was preceded in death by Sherwin, her parents, and her sisters, Betty Lash and Shirley Pitts. She is survived by her daughters, Sherilyn (Scott) Sasso of Hendersen, Nevada, JaNay (Brett) Lowe of Boise, Idaho, and Michelle (Cal) Wimmer of American Fork, Utah; and her grandchildren and great-grandchildren. The family would like to give special thanks to Summerfield Assisted Living and Envision Hospice for their kind and loving care given during our mother’s stay. Funeral services will be held Monday, January 28 at 11:00 a.m. at the Grandview 10th Ward Chapel, 1600 North 1880 West, Provo, Utah. Friends may visit with the family from 9:30-10:45 a.m. prior to services. Interment, Provo City Cemetery. Condolences may be expressed at www.bergmortuary.com.

Evelyn Valene Johnson peacefully joined her husband of 56 years, Sherwin, at her Summerfield home on January 22, 2019. Valene&#8217;s life journey began on December 19, 1932, in Idaho Falls, Idaho to William and Sybil Brookbush. She was the... View Obituary & Service Information

The family of Valene Johnson created this Life Tributes page to make it easy to share your memories.