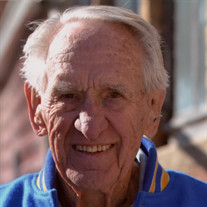 Van Hillas Washburn, Sr., age 88, passed away quietly March 11, 2015, at the home of his son. He was born July 24, 1926, in Provo, Utah to Violet Florence Hillas and Jesse Nile Washburn. Van is a 5th generation member of The Church of Jesus Christ of Latter-day Saints. During World War II he served in the U.S. Army (Ordnance Department) at locations in Hawaii, New Caledonia, and Oklahoma. From 1948 to 1950 he served a mission in the Texas-Louisiana Mission, where he preached more funeral sermons than he had baptisms. Two weeks after returning from his mission he married his sweetheart, Nellie Mecham, who had left on her mission six months after he left. They were married on June 22, 1950 in the Salt Lake LDS Temple. Nellie passed away November 3, 1990. They are the parents of nine children: Van Hillas (Charlotte) Washburn, Jr., Michael Crail (Lynne) Washburn, Gary Benson (Sally) Washburn, Janiece (LaVon) Broderick, Jeffry Lynn (Roseli) Washburn, Mark Quinten (Eliane) Washburn, Kathie (Ken) Gibson, Lara (James) Franson, and Brian McKay (Candace) Washburn. Van and Nellie have 34 grandchildren and 25 great-grandchildren. His favorite calling in the Church was teaching the Gospel Doctrine class, which he did in every ward he lived in from 1950 to 2008. Van attended Carbon College in Price, Utah, where he was Student Body President. For 32 years Van worked for the United States Postal Service and was Postmaster at the Springville Post Office. Van married Marilyn Morley August 10, 1991 in the Provo LDS Temple. They served a mission from 1998 to 1999 in American Samoa. Marilyn currently lives with her children in Laie, Hawaii. Van enjoyed being with his family, his service in the Church, airplanes, old cars, model airplanes, and his flower gardens. Van will be buried in the Provo City Cemetery next to Nellie. Funeral services will be held at 1:00 p.m., Thursday, March 19, 2015 at the Jordan Willows 4th Ward Chapel, 901 South 2300 West, Lehi, Utah. Friends may call at the Berg Mortuary of Provo, 185 East Center Street, Wednesday, March 18, from 6-8:00 p.m. and at the church Thursday, from 11:30 a.m.-12:45 p.m. prior to services. Condolences may be sent online at www.bergmortuary.com.

Van Hillas Washburn, Sr., age 88, passed away quietly March 11, 2015, at the home of his son. He was born July 24, 1926, in Provo, Utah to Violet Florence Hillas and Jesse Nile Washburn. Van is a 5th generation member of The Church of Jesus... View Obituary & Service Information

The family of Van H. Washburn Sr. created this Life Tributes page to make it easy to share your memories.

Send flowers to the Washburn family.