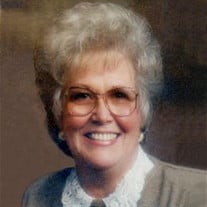 Venice Isom Dunn passed away peacefully in her sleep at home on November 17, 2015. She was born March 11, 1931 in the quaint little southern Utah town of Hurricane. Her youngest years were spent in the Virgin River area that was settled by her ancestors and she had a fondness for that area. She lived her teenage years in Provo where she met then married her high school sweetheart, the late Richard C. Dunn on September 7, 1949. They were sealed in the Salt Lake Temple in 1962 and celebrated 63 years of marriage. She worked many jobs but spent the bulk of her career at Skaggs and at BYU in Student Life where she retired after many enjoyable years of service. Her activity in the LDS church included service to both the children and the adults in too many callings to mention, except for one, that being a shared calling with her spouse as Sunday School teachers for the 16-18 year old youth. Even after 45 years, those now grown youth speak sweetly of the sacred influence she had on them. She was the last surviving child of Andrew and Ada Isom's nine children. She is survived by her four children: Randy (Denise) Dunn, St. George, Utah; Dennis (Susan) Dunn, Elk Ridge, Utah; Vickie (Calvin) Arnold, South Jordan, Utah; and Tammie (Michael) Healey, Lehi, Utah; 18 grandchildren and 26 great-grandchildren. She was preceded in death by one grandson, one granddaughter and one great-grandson. A short graveside service will be held at 11:00 a.m., Saturday, November 21, 2015 at East Lawn Memorial Hills, 4800 North 650 East, Provo, Utah. Venice insisted, with considerable debate from her children, on a closed casket and no funeral service. Her wishes will be honored but, as we children warned her that we will have the last say, we have decided to have an "Open House" with a closed casket, at the Berg Mortuary of Provo, 185 East Center Street, from 9:30-10:30 a.m. prior to services at the cemetery. All friends and acquaintances are welcome and encouraged to come to visit and reminisce that hour. Condolences may be extended to the family at www.bergmortuary.com. A special thanks to the Visiting Angels Pauli and Ann and the selfless neighbors who lovingly cared for her. She also requested that in lieu of flowers that donations be made to the LDS mission fund.

Venice Isom Dunn passed away peacefully in her sleep at home on November 17, 2015. She was born March 11, 1931 in the quaint little southern Utah town of Hurricane. Her youngest years were spent in the Virgin River area that was settled by her... View Obituary & Service Information

The family of Venice Isom Dunn created this Life Tributes page to make it easy to share your memories.

Venice Isom Dunn passed away peacefully in her sleep at home...

Send flowers to the Dunn family.