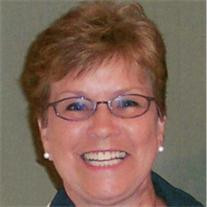 Vera "Colleen" West Wilkins Richards slipped out of this life returning to her Father in Heaven on January 8, 2012. She was born in Rigby, ID on March 17, 1940 to Tenneth K West and Vera Odessa Madsen West, the second of four children. She was raised in Rigby, ID on a small farm. She enjoyed school and had many friends. She graduated from Rigby High School in June 1958. She was employed at the Argonne Atomic Energy Site. She married Allen "Gene" Wilkins and was later divorced. They had three children. Colleen met the love of her life and best friend and was married January 16, 1970 to Robert Spencer Richards. Through the marriage she gained an additional daughter and they were later blessed with another daughter. They were later sealed in the Provo, UT Temple. She loved and enjoyed her children, grandchildren and great grandchildren. She was warm and loving to all. She was always ready with a treat for the neighbor children for the price of a hug. She enjoyed outings and activities with her family and traveling. Disneyland was her happy place. She enjoyed 25 years of employment with the State of Utah as an Investigator. She suffered a heart condition and had a mitral valve replacement in 1997. She was active in her church and served in many callings. She and her husband served a mission at the Lindon Cannery. She is survived by her husband, Robert S. Richards, Her daughters, Jana L Hendricks (Todd D), Shawna L Brown, (Jeff), Karen L Jolley (Todd R) and Rachael A Cameron (Matthew T), a son, Gregory A Wilkins (Traci), Her mother, Vera, her brothers, John Wood, Brian K West and sister, Dee Ann Larsen, 22 grandchildren and 12 great-grandchildren. She was preceded in death by her father, Tenneth. She was a loving wife, mother, grandmother, and friend and will be greatly missed by all. Funeral services will be held at 11:00 a.m., Friday, January 13, 2012 at the Orem Lakeview Stake Center, 400 West 1800 South, Orem, UT. Friends may call at the church on Thursday, January 12, from 6:00-8:00 p.m. and Friday from 9:30-10:45 a.m. prior to services. Interment will be in the Orem City Cemetery. Condolences may be sent through her obituary at www.bergmortuary.com.

Vera "Colleen" West Wilkins Richards slipped out of this life returning to her Father in Heaven on January 8, 2012. She was born in Rigby, ID on March 17, 1940 to Tenneth K West and Vera Odessa Madsen West, the second of four children. She... View Obituary & Service Information

The family of Vera "Colleen" West Wilkins Richards created this Life Tributes page to make it easy to share your memories.

Vera &quot;Colleen&quot; West Wilkins Richards slipped out of this life...