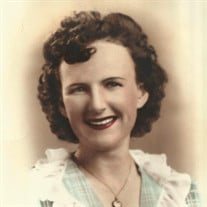 Verda Louise Howard Watkins of Pleasant Grove, Utah passed away March 15, 2022. She is survived by son Carl Dennis Watkins, her seven grandchildren, Deserie Lynn Jensen of Provo, Utah, Carla Denise Forrest (Eric) of Alabama, David Ryan Watkins (Leah) of Santaquin, Utah, Tauna Marie Stowell (Greg) of Chubbuck, Idaho, Cristy Suzanne Heinrichs (Landon) of Saratoga Springs, Utah, Michael Adam Watkins (Kaci) of Eagle Mountain, Utah, Shawn Carl Watkins (Loren) of Eagle Mountain, Utah, and 22 great-grandchildren, and one great-great-granddaughter. She was preceded in death by her husband Leroy Watkins, her mother Louisa B Park Howard, father Josiah Howard, daughter-in-law Linda Joyce Ward Watkins on Dec 3, 2021, half-brother John Hugh (Pilbury) Howard, sister Leona Martha Howard Andrus, sister Virginia Elizabeth Howard Coulson, brother Vernal Park Howard, brother Melvin Josiah Howard, grandson-in-law Brian Niels Jensen on July 8, 2019, and great-granddaughter Millie Jane Watkins on November 10, 2021. Verda was born in Provo, Utah on May 14, 1917, the fifth of six children. She was raised in Carry, Idaho until age 12. In 1929, her mother brought her and her 3 unmarried siblings to North Long Beach, California to live close to her older sister Leona. Verda graduated from Long Beach Poly High School in 1936. She met Leroy Watkins from Temple, Oklahoma in 1939 and they were married in Long Beach, California on October 10, 1943. Their only child, son Carl Dennis Watkins was born in 1944, in an Army hospital in Charleston, South Carolina where Roy was stationed in the Army. After a short move to Georgia they were separated by Roy’s military duty. Verda then moved with Carl to Long Beach, California to stay with her mother until Roy was released from military duty in 1945. They then made their home in North Long Beach until they bought their house in Lynwood, California in 1948. Verda later attended Los Angeles Trade Technical College where she became an accomplished seamstress. For several years Verda made shirts for Roy and Carl. She took Carl to the store to choose his favorite fabrics, purchased them and used them to make Carl shirts for school. In the late 1950s, Verda and Roy became members of a local square-dancing club and went square dancing nearly every weekend. In the 1960s, Verda formed “Twirl Away Togs,” making petticoats for square dancers. She operated several booths at square dancing conventions around the country selling petticoats and dresses. Verda and Roy moved to Lakewood, California in 1977 where Roy converted a bedroom into a sewing room for “Twirl Away Togs.” In the 1990s, Verda developed Macular Degeneration causing a loss of her eyesight, which ended her work as a seamstress. Roy passed away on March 3, 2002. One year later Roy’s temple work was performed by Shawn Watkins (baptism), Carl Watkins (endowment), and David Watkins (sealing). In 2004, Verda moved to Leisure World in Seal Beach, California. In 2005, she broke her hip from a fall, but healed with a partial hip replacement. In 2015, Carl helped her to move into a small house in Pocatello, Idaho next door to her granddaughter Tauna who cared for her. In 2016, Verda moved to the Chateau Brickyard Independent Living Center in Salt Lake City where she turned 99. The following year Verda moved to the Seville Independent Living Center in Orem, Utah to be closer to 5 of her other grandchildren living in Utah County. This is where she celebrated her 100th birthday with a performing band, a luncheon, and a television interview from Channel 4. In 2021, requiring more nursing care, she moved to the Welcome Home Assisted Living Center – American Fork in Pleasant Grove, Utah. She gradually grew more frail and passed away peacefully on March 15, 2022 at the age of 104. Funeral services will be held at 1:00 p.m., Tuesday, March 22, 2022 at the Parkway 2nd Ward Chapel, 2801 West 620 North, Provo, Utah. Friends may call from 11:30 a.m.-12:50 p.m. prior to services. Interment, March 30, at 9:30 a.m. at the Riverside National Cemetery, 22495 Van Buren Blvd, Riverside, California. Condolences may be expressed at www.bergmortuary.com.

The family of Verda Louise Howard Watkins created this Life Tributes page to make it easy to share your memories.

Send flowers to the Watkins family.