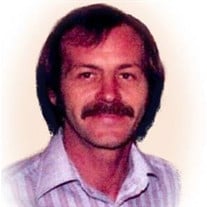 Verdell Hyrum Nerdin, known as Dale to family and friends, passed away peacefully April 23, 2016 at Utah Valley Regional Medical Ctr. in Provo due to complications of a long term illness. Dale was born in Pleasant Grove, Utah January 9, 1947, to Darwin H. Nerdin and Leota Bradbury Nerdin. He was an only child and raised in Pleasant Grove. He was a member of The Church of Jesus Christ of Latter-day Saints. He married Lynda McEwan December 20, 1975. Their marriage was solemnized in the Provo Temple November 21, 2013. In his early career, Dale was a Master Machinist at Hill Air Force Base. He used his technical skills throughout various occupations. He was very detail oriented and did excellent work in the Auto Body and Restoration business, working on building classic hot rods to concourse quality Porsche restoration. One of his Porsche restorations earned top awards at a Las Vegas concourse auto expo and was featured on the cover of an auto restoration magazine. The network of classic car enthusiasts had high respect for the projects he worked on because they were always of the high standards Dale had. He also worked in construction and Commercial truck driving, having earned an award for his driving skills at Utah Technical College. He excelled at metal fabrication, welding, auto mechanics, small and large engine rebuilds, bicycle restorations and most anything mechanical. He was a draftsman, using this skill to design and build things from a Swiss Chalet bird house to scale model pioneer cabins to home modification projects. He knew how to use tools that most of us don't even know what they are. Dale enjoyed camping and hiking, and all activities centered around family. He and wife Lynda loved exploring old ghost towns, digging for antique bottles and other "finds." The greatest treasure from these trips was always the laughter and conversation with loved ones around the campfire at day's end. Dale lost his sweet wife Lynda in March of 2003, after being her devoted and loving caretaker for many years before her passing. This left a terrible void in his life, but Dale kept working to be productive and of service to others, even as his own health began to fail him. With determination, he pressed forward anyway, serving many families as a Home Teacher and at last meeting his goal to go to the Temple and have his beloved wife sealed to him for eternity. Dale told a friend, "I'm not giving up on my dreams!" which kept him going as long as he could. Dale was a good listener and a good friend to all. He will be greatly missed. He is survived by his 3 step-children, Steve (Kim) Jorgensen of Springville, Jackie Jorgensen and also Rod Jorgensen, both of Provo. Graveside services will be held at 11:00 a.m., Wednesday, April 27, 2016 at the Provo City Cemetery, 610 South State Street, Provo, Utah. Family and friends are invited to meet at the cemetery. Condolences may be expressed to the family at www.bergmortuary.com. In lieu of flowers, the family would appreciate donations to help cover the cost of funeral expenses. Send to Rodney Jorgensen, c/o Provo Diesel, P.O. Box 50431, Provo UT 84605

The family of Verdell Hyrum Nerdin created this Life Tributes page to make it easy to share your memories.

Send flowers to the Nerdin family.