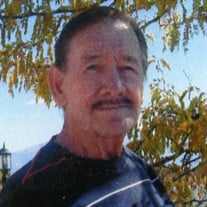 Our Father and Grandfather, Verl “Andy” Anderson Stubbs was called home on July 26, 2016 in Orem, Utah. He was born on May 11, 1947 in Provo, Utah to Mary Louis Anderson and Verl Loveless Stubbs. He graduated from Provo High. He was a member of the Gents Car Club which began his passion for cars and was still in possession of his 39 Ford Coupe. At 18, he was drafted into the Vietnam War. When he came home he met the love of his life, Suzanne Reay. They ran a successful business, Stubbs Reality and Construction for years. They later divorced. Andy is survived by their three children: Sharina Chipman, Bryan (Natalie) and Cody; and six grandchildren that he loved and adored: Austin, McKay, Colton, Catelyn, Chloe, and Hunter; and sisters, Verleen (Tom) Gagon and Dina Jackson. He was preceded in death by his parents, Mary Louis Anderson and Verl Loveless Stubbs and Greg Gagon. Graveside services will be held at 11:00 a.m., Monday, August 1, 2016 at the Provo City Cemetery, 610 South State Street, Provo, Utah. Friends may call at the Berg Drawing Room Chapel, 185 East Center Street, Provo, Utah, from 9:30-10:45 a.m. prior to services at the cemetery. Condolences may be expressed at www.bergmortuary.com.

The family of Verl "Andy" Anderson Stubbs created this Life Tributes page to make it easy to share your memories.

Our Father and Grandfather, Verl “Andy” Anderson Stubbs was called...

Send flowers to the Stubbs family.