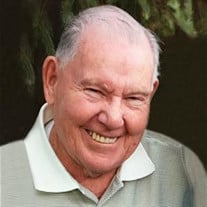 We lost a fun, loving, energetic soul today. Verl J Madsen, 94, died as he lived; peacefully with compassion, meaning and strength. Our beloved husband, dad, grandpa, great-grandpa and friend returned to the loving arms of his Father in Heaven Sunday, January 8, 2017. He patiently looked forward to a reunion with his son Joseph, parents and loved ones. Verl was born November 1, 1922 in Malad, Idaho to Joseph Horace Madsen and Zana Petersen Madsen. He attended Lincoln High School where he played football and served as Student Body President. He then attended Utah State University prior to joining the United States Army. He married his eternal companion, Evelyn Kopp Madsen on March 13, 1948. They raised their four daughters in Orem, where over the years many long-lasting friendships were made. His compassionate nature made everyone feel welcome. He retired from Geneva Steel using his keen mind as a chemist. His association with the Geneva Recreation Association provided years of fond memories for the Madsen family. A devout member of The Church of Jesus Christ of Latter-day Saints, he demonstrated his love for the Savior by serving his family and countless friends every day. He greatly enjoyed his service in the church, especially working the stake farm, serving a mission with his wife in the Provo Tabernacle and preparing for the opening of the Mount Timpanogos Temple. He leaves a legacy of hard work, church devotion and family dedication. He took great pride in his home and yard creating an atmosphere of love and beauty for his family. We love you dad and know you are in the presence of loving and kind individuals whose spirits are as noble as your own. We will continue your legacy. He is survived by his wife, Evelyn; daughters, Karen (Neal) Wilson, Jeri (Steve) Goffin, Charlene (Shane) Robbins and Denise (Matt) Pecht. His 31 grandchildren and 31 great-grandchildren absolutely adore him. He will be missed by his extended family, neighbors and friends. He was preceded in death by his infant son, Joseph, parents and brothers, Bud Ledru Madsen and Curg Moyle Madsen. Funeral services will be held at 1:00 p.m., Friday, January 13, 2017 at the Geneva Heights 2nd Ward Chapel, 590 North 900 West, Orem, Utah. Friends may visit at the church Thursday, January 12 from 6-8:00 p.m. and Friday from 12-12:45 p.m. prior to services. Burial will follow in the Provo City Cemetery. Condolences may be expressed at www.bergmortuary.com.

We lost a fun, loving, energetic soul today. Verl J Madsen, 94, died as he lived; peacefully with compassion, meaning and strength. Our beloved husband, dad, grandpa, great-grandpa and friend returned to the loving arms of his Father in Heaven... View Obituary & Service Information

The family of Verl J Madsen created this Life Tributes page to make it easy to share your memories.