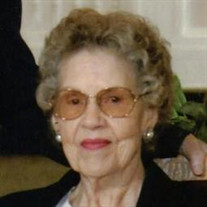 Verna Mae Wing Garrett passed away on May 11, 2015 in Salt Lake City at the age of 95. She was born October 3, 1919 to Earl Bohne Wing and Viola Mae Smith Wing in Springville, Utah. She attended Springville High School, BYU, and Utah Technical College. She married W. Weston Garrett on June 30, 1939 in Springville, Utah. Together they raised 4 children. They lived in Provo for most of their married life. After her conversion to the LDS Church in October 1963, the family was sealed in the Salt Lake Temple on December 10, 1964. She and her husband served a mission in the Texas Dallas Mission from July 1986 to July 1987. She held several positions in the Church including Relief Society Counselor, President and Secretary in the YWMIA, Sunday School Secretary, and Ward and Stake Librarian. She served with her husband in the Provo Temple from 1976 until 1994 and at the Data Entry Center. She worked for J.C. Penny in Provo from 1958 to 1968 and then at the main Provo office of First Security Bank for 15 years. She retired in 1982. She was Charter Member of the Provo Jaycee Wives; President of the Timpanogos Womens Golf Association; Charter Member and President of the Utah Beta Epsilon Chapter and Exemplar Chapter of Beta Sigma Phi; President of the Farrer Junior High PTA and Secretary of the Provo High PTA; member of the Provo Credit Women; member of the Credit Women International; member of the Utah County Chapter of the American Institute of Banking; Captain of the Squaw Peak Camp of the Daughters of the Utah Pioneers. She loved spending time with her large posterity! She attended all the important family events and NEVER forgot to send each one a birthday card with a little money tucked inside. She enjoyed reading, golfing, needlework, attending BYU basketball games, all the sporting events of her children, grandchildren, and great-grandchildren. She was a great record keeper. She was a prolific plate collector and left behind enough for the whole family to share. She is survived by 3 sons and 1 daughter: Russell W. (Kathy Graehl), Las Vegas, NV; Kent L. (Ann Collins), St. George, UT; Bruce K. (Tricia Spreckelsen), North Salt Lake, UT; Diane (Michael) Allred, Sandy, UT; 20 grandchildren; 50 great grandchildren; 2 great-great grandchildren. She was preceded in death by her husband Weston, parents, brother, sister, and grandson Jacob. Funeral Services will be held at 10:00 a.m. on Saturday May 23, 2015 at the Bonneville 5th Ward Chapel, 85 South 900 East, Provo. Friends may call at the Berg Mortuary of Provo, 185 East Center, Friday evening, May 22, from 6 until 8 and at the church Saturday from 8:30-9:45 prior to the service. Interment at Provo City Cemetery.

Verna Mae Wing Garrett passed away on May 11, 2015 in Salt Lake City at the age of 95. She was born October 3, 1919 to Earl Bohne Wing and Viola Mae Smith Wing in Springville, Utah. She attended Springville High School, BYU, and Utah Technical... View Obituary & Service Information

The family of Verna Mae Wing Garrett created this Life Tributes page to make it easy to share your memories.