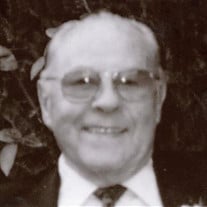 Vernon Smith Cheever was born on a beautiful fall morning in Provo, Utah on October 17, 1922. He was the fourth son and fifth child of Annie E. Mecham and Elmo Smith Cheever. He passed away March 7, 2016 in Payson, Utah surrounded by his loved ones. Vernon or Bun as he was lovingly called throughout his life, married his High School sweetheart Martha Louise Taylor on March 12, 1940 in Provo, Utah and their marriage was later solemnized in the Salt Lake City Temple. He was a wonderful Son, Husband, Father, Bumpa and Great Bumpa. He lost three brothers in their twenties and one little sister, leaving him the only living child by the age of twenty-five. He and Martha loved and cared for his dear parents for the remainder of their lives. He served in the Army during WWII and returned and went into business with his father who owned and operated Utah County Packing Company. The business thrived for many years, and then sadly in 1967 it was destroyed by fire. They rebuilt only to have their dream be destroyed by fire once again. He was a devoted member of The Church of Jesus Christ of Latter-day Saints. He served the Lord with faith and diligence. He held many positions in Young Men Leadership, Elders Quorum and as the High Priest Group Leader. He was a Home Teacher for most his life and loved to care and serve each family he taught. Everyone loved Vernon; his happy, caring personality left those he met with a smile and a renewed joy for life. He was such a generous man with a great work ethic; he instilled this in each of his children. Everyone agrees that he could repair, build or do anything with his hands. He played the piano by ear and often blessed us with his beautiful melodies. Vern and Martha were blessed with four children and enjoyed a wonderful life together; the cabin in Vivian Park, boating, vacations to California, rides in his airplane and taffy pulls with the grandchildren. In 1987 after almost 50 years together, Vern’s sweet Martha passed away, just 18 months later his daughter Patricia passed away as well. Vern’s love and devotion for his children and grandchildren continued and grew stronger. Instead of retiring at 70, he worked for the Chamber of Commerce and in Real Estate. He went to work for CSS Security where he met and married Ruth Alex. Together Vern and Ruth built a beautiful home and life together in Payson, Utah. They enjoyed many trips in their motor home and a memorable trip to Europe. The two of them created a glorious garden surrounding their home, with trees named after each of their children and grandchildren. They created many wonderful memories with family and friends. Vern’s love and kindness will always be an example to his posterity. We will love and miss him. Until we meet again. He was preceded in death by his wife of 47 years, Martha Taylor Cheever, his parents, 3 older brothers, George, Harold, Joseph and sister Phyllis, daughter Patricia and 3 great-grandsons. He is survived by his wife Ruth Cheever, his daughter Vickie (Bruce) Coles, sons Gary (Linda) Cheever, Ronnie (Roxanne) Cheever, son-in-law Alva Nelson and 2 stepchildren Steve Alex, Donna (Kenny) Carter, 32 grandchildren, 49 great-grandchildren, and 10 great-great-grandchildren. Funeral services will be held at 11:00 a.m., Friday, March 11, 2016 at the Berg Drawing Room Chapel, 185 East Center Street, Provo, Utah. Friends may call from 9:30-10:45 a.m. prior to services. Interment will be held at the Provo City Cemetery with full military rights. Condolences may be expressed to the family at www.bergmortuary.com.

Vernon Smith Cheever was born on a beautiful fall morning in Provo, Utah on October 17, 1922. He was the fourth son and fifth child of Annie E. Mecham and Elmo Smith Cheever. He passed away March 7, 2016 in Payson, Utah surrounded by his loved... View Obituary & Service Information

The family of Vernon Smith Cheever created this Life Tributes page to make it easy to share your memories.

Vernon Smith Cheever was born on a beautiful fall morning in...

Send flowers to the Cheever family.