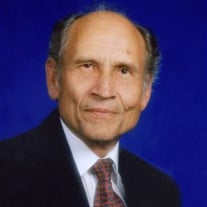 Vernon Leon Greenland, 93, passed away peacefully November 14, 2017, from causes incident to age. He was born February 10, 1924, to William John and Cressie Loveridge Greenland and raised in Highland, Utah. He graduated from American Fork High School and attended LDS Business College. He enlisted in the U.S. Army during WWII (honorably discharged), and was stationed in the San Francisco Bay area where he developed a love for opera that he was unable to pass on to anyone else in his family. He served an LDS Mission in New Zealand. He married Golda Roundy in the Salt Lake LDS Temple, June 1, 1951. They were residents of Orem since 1952. He worked at Geneva Steel for 35 years, primarily as a Materials Engineer. After retirement he sold cars for Naylor Auto and served on the Orem City Planning Commission and Board of Adjustment. He held numerous LDS Church positions including gospel doctrine teacher, choir director, YMMIA President, scoutmaster, bishop, stake high council, and stake patriarch. He was a Silver Beaver Boy Scout. He volunteered with his wife at The Church History Museum in Salt Lake. He loved jogging 5 miles a day until his health and age intervened. He was a Little League and Pony League baseball coach and church basketball official. He liked to work outdoors in his yard and garden, keeping up-to-date with current events, traveling to his beloved Israel and was a longtime season ticket holder to BYU football and basketball games. Nothing brought him more happiness than time spent with his family, especially multiple monthly dinners, New Year's at the house and the annual family summer picnic at Bonneville Park. They took grandkids on numerous trips, including Yellowstone, Mt. Rushmore, Colorado, and California. Special thanks to Dr. Marshall Willis, Dr. Chun Hwang and IHC Hospice for their special attention to Dad in his later years, and especially to his favorite nurse, his granddaughter, Rachelle. He was preceded in death by his parents; brothers, John, Hubert and Dan; and sisters, Lois and Martha. He is survived by his wife, Golda; three children: Kimball, Suzanne and Phillip; seven grandchildren; and 23 great-grandchildren. Funeral services will be held on Monday, November 20, 2017, at 11:00 a.m. in the Geneva Heights Second Ward, 590 North 900 West, Orem, Utah. Friends may call on Sunday evening from 5-7:00 at the Berg Mortuary of Orem, 500 North State Street, Orem, Utah and at the Church on Monday morning from 9:30-10:30. Interment, with military honors, at Orem City Cemetery, 1520 North 800 East. Condolences may be expressed at www.bergmortuary.com.

The family of Vernon Leon Greenland created this Life Tributes page to make it easy to share your memories.

Send flowers to the Greenland family.