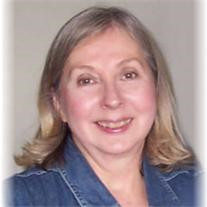 Vickie Lyn Carter Jacobsen, 65, our loving wife, mother, grandmother and sister passed away on Wednesday, March 9, 2011. She was born in Provo, Utah on May 21, 1945 the second child and only daughter to Edward K and Lela H Carter. She would be followed by 3 more brothers. She graduated from Provo High School in 1963, and married Robert Kenneth Jacobsen on November 30, 1967. They spent their married life in Orem, Utah. They were blessed with four children, Korrin (Brent) Thompson, Michael (Brienna) Jacobsen, Brandon (Angela) Jacobsen, and Ashlee (Daniel) Jorgensen. She also had 11 grandchildren: Jake, Michael, Kaylie, Harlie, Devan, Emily, Alyssa, Elizabeth, Spencer, Adrienne, and Bridger. Vickie loved spending time with family, her greatest joy was her grandchildren. Fun times were always to be had at grandma's house. She especially loved to travel and went on many trips with her family. One of her favorite places to go was Disneyland. Pirates was her favorite ride and it quickly became tradition to always be the first. Vickie also enjoyed decorating and redecorating her home, flower gardening, and antiquing with friends. Vickie was always aware of the needs of others. She taught her children charity by the way she cared for those around her. She always had a kind word and helped us to see another's perspective. She is survived and dearly loved by her husband, children, grandchildren and four brothers. She was proceeded in death by her parents. Funeral services will be held Monday, March 14, 2011, at 11:00 a.m. at the Aspen 5th Ward LDS Chapel, 965 West 2000 North, Orem, Utah. Friends may call Sunday evening, from 6-8 p.m., at the Berg Mortuary of Orem, 500 North State Street, or Monday morning, at the ward chapel, one hour prior to services. Interment, Timpanogos Memorial Gardens, 1000 North 400 East, Orem. Condolences may be sent through www.bergmortuary.com or [email protected]

Vickie Lyn Carter Jacobsen, 65, our loving wife, mother, grandmother and sister passed away on Wednesday, March 9, 2011. She was born in Provo, Utah on May 21, 1945 the second child and only daughter to Edward K and Lela H Carter. She would... View Obituary & Service Information

The family of Vickie Carter Jacobsen created this Life Tributes page to make it easy to share your memories.