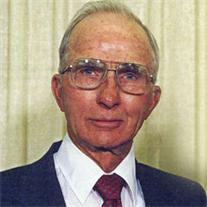 Victor Lewis Petersen, 93, passed away on Thursday, October 18, 2012, his loving daughters at his side. Victor was born on November 15, 1918 in Provo, Utah; the oldest son of Christian Lewis Petersen and June Packard Tuckett Petersen, He was educated in Provo and graduated from Provo High School. He met Hazel Killian, the love of his life, at a dance in Springville. They were married on September 2, 1941 in the Salt Lake Temple. They were blessed with two daughters Christine and Irene Kay. He was a World War II veteran, who served in Europe and was a recipient of 5 battle stars. He worked for Geneva Steel for over 35 years. He loved hunting with his nephews. He was also an excellent fisherman and loved to spend time with his family at Strawberry Reservoir. He is preceded in death by his sweetheart, Hazel and by siblings, Ione Watkins, Arlene Carter, Merle Daybell Vincent and Verl H Petersen. He is survived by daughters, Christine Petersen (Bradley) Jensen and Irene Kay Peterson and a sister, Melba Petersen Fuller (American Fork) and brother, Harold Petersen (Salt Lake City). Victor has four granddaughters: Mindy, Megan, Amber & Bethany; two grandsons: Justin & Dane; and three great-grandchildren: Jayston, Sierra & Leah. Funeral services will be held at 11:00 a.m., Tuesday, October 23, 2012 at the Slate Canyon 4th Ward Chapel, 715 S. Utah Avenue, Provo, Utah. Friends may call at the Berg Mortuary of Provo, 185 East Center Street, on Monday evening from 6 until 8, and at the church Tuesday from 9:30 to 10:45 a.m. prior to services. Interment, Provo City Cemetery. The family would like to thank the employees of Bel Aire Senior Center in American Fork, Bristol Home Health, and Envision Hospice for their kind service to our father. Condolences may be sent through his obituary at www.bergmortuary.com.

Victor Lewis Petersen, 93, passed away on Thursday, October 18, 2012, his loving daughters at his side. Victor was born on November 15, 1918 in Provo, Utah; the oldest son of Christian Lewis Petersen and June Packard Tuckett Petersen, He was... View Obituary & Service Information

The family of Victor Petersen created this Life Tributes page to make it easy to share your memories.