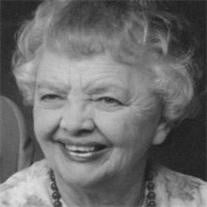 Virginia Booth Allred passed away June 10, 2012 in Orem, Utah. Virginia was born of goodly and loving parents at the family home in Provo on January 14, 1920, the daughter of Edith Young and Alfred Lewis Booth. She had a very happy childhood surrounded by many loved ones, including Grandma Young, aunts, uncles and cousins, as well as her immediate family. She attended BYU Training School, Dixon Junior High and graduated from Provo High in 1938. Virginia attended LDS Business College and worked in Provo and Salt Lake City until 1940 when she received an offer from the U.S. Government to work in Washington, D.C. After World War II began, she joined the Women's Army Corps and served in California, Australia and the Philippines. She graduated from BYU in 1949 in English and Secondary Education. She then served a mission to Great Britain from 1949 to 1951. On December 19, 1952, Virginia married Wendell U. Allred in the Salt Lake Temple and became a mother to his two boys, Cory and Kelly. The family lived in Sacramento and Palo Alto, California. From 1965 to 1981, Virginia worked as a part-time secretary at the Stanford University Classics Department. In 1981, she and Wendell retired and returned to Provo. Virginia was an active member of the LDS Church and served in all of the auxiliaries. Her favorite position was Visiting Teaching Coordinator. She was happy to work in the Provo Temple for many years and was blessed to be assigned to the Sealing Office where she worked with many wonderful people. She was an officer in the Nelke Reading Club and Provo Yesharah, as well as a member of Utah County Republican Women. She enjoyed reading obituaries. She was blessed with a loving family, friends and the gospel. We will miss her sense of humor, sense of responsibility, generosity, optimism, remarkable memory and constant desire to find a connection with everyone she met. Virginia is survived by her children Kelly (Lynda) Allred of Las Cruces, New Mexico, and Beverly (Eric) Royer of Orem, daughter-in-law Janie Allred of Pleasant Grove, sister Phyllis (Carlos) Phillips of Provo, sister-in-law Nan Booth of Logan, brother-in-law Don Neville of Kaysville and 12 grandchildren and 29 great-grandchildren in Minnesota, New Mexico, Oklahoma and Utah. She was preceded in death by her husband Wendell, son Cory, grandson Nathan Kelly Allred, and siblings Editha Booth, Leona White, Thornton Booth and Margery Neville. Funeral services will be held at 11 a.m. on Saturday, June 16, 2012 at the Oak Hills Stake Center, 925 East North Temple Drive, Provo. Viewing will be held at the Stake Center from 9:30 to 10:45 a.m. prior to the services. Interment will be in the Provo City Cemetery. The family wishes to thank all those who supported Virginia during the last several years, specifically home teacher David Harlow and other members of the Oak Hills Fourth Ward, home care and hospice personnel, especially Amy Hansen and Ginselvi Gompose, the staff of Utah Valley Regional Medical Center and its Emergency Department, the staff of Orem Rehab and the staff of the north Orem Beehive Home. In lieu of flowers the family suggests donations to Primary Children's Medical Center Foundation, PO Box 58249, Salt Lake City, Utah 84158-0249. Condolences may be sent to the family through her obituary at www.bergmortuary.com.

Virginia Booth Allred passed away June 10, 2012 in Orem, Utah. Virginia was born of goodly and loving parents at the family home in Provo on January 14, 1920, the daughter of Edith Young and Alfred Lewis Booth. She had a very happy childhood... View Obituary & Service Information

The family of Virginia Allred created this Life Tributes page to make it easy to share your memories.

Send flowers to the Allred family.