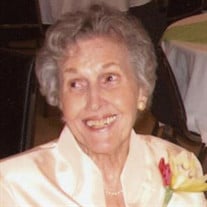 Virginia Ray Cotton McKinney lived a wonderful life. She was one who indeed was sold out for Christ and made His glory her highest end. Virginia (also known as, “Ray Baby”, “Gina”, “Granny”, and “Dede”) was born in Malmaison, Mississippi, on June 18, 1922 to Frank and Stella (Mimi) Cotton. Her father died when she was four. She was raised by her mother and six older brothers and sisters in Memphis, Tennessee. She met Billy McKinney whose parents lived in an apartment across the hall when he came home from leave as a Pilot in the Army Air Corps. They were married March 9, 1946 and began their family at Scott AFB, Illinois. Their legacy includes four sons along with their wonderful daughters in law; Bob (Peggy), Bill (Barbara), Keith (Joanne), and Scott (Sara). They had 13 Grandchildren and 26 Great grandchildren. Bill and Gina not only loved one another but they built a home where there was laughter and love, and where friends were treated like family. Virginia’s life changed in the mid 1960’s when she was no longer satisfied going through the motions of faith. She began to study the Bible and gave her life to the One that the Bible is all about, Jesus. She began to pray. One of the lasting memories her sons have of her are of her kneeling on an old rocker praying for them, their wives and children, and friends, and strangers and the needs of each new day. The end result is that her husband and the rest of her family followed her example and came to faith in Christ. Virginia moved to Orem, Utah with her husband in 1996 and became members of CenterPoint Church where her youngest son Scott is the pastor. Her second son Bill is the pastor of Mariners Church in Annapolis, MD. Her third son Keith was the pastor of Pacific Coast Bible Church in Dana Point, CA before passing away in 1997. Their oldest son Bob is a retired Air Force officer and teaches at Rampart HS in Colorado Springs. Virginia’s husband Billy died in 2009 after 63 years of marriage. It was a painful loss and she missed him so much. On Monday night, March 6, they were reunited as she passed from this life to the next. That is not what made that day the Best Day. It was the best day because on that day she came face to face with Jesus, her Redeemer and her Lord. Hallelujah! Death to a believer is like a wedding day for a bride, freedom day for a prisoner, or a coronation day for a monarch. It is deliverance from sin, an end to sorrow, a rest from afflictions and temptations. Most of all it is the day when we finally reach home. Revelation 21:3-5: “Behold, the dwelling place of God is with man. He will dwell with them, and they will be his people, and God himself will be with them as their God. He will wipe away every tear from their eyes, and death shall be no more, neither shall there be mourning, nor crying, nor pain anymore, for the former things have passed away.” And he who was seated on the throne said, “Behold, I am making all things new.” Graveside services will be held at 2:00 p.m., Monday, March 13, 2017 at the Utah Veterans Memorial Park, 17111 South Camp Williams Road, Bluffdale, Utah. Friends may call at the Utah Veterans Memorial Chapel from 1-1:50 p.m. prior to services. Family and friends may call at the CenterPoint Church, 1550 S. Sandhill Road, Orem, Utah, Monday, March 13, at 6:30 p.m. In lieu of flowers, please make donations to the CenterPoint Church Parking Lot Fund, 1550 S. Sandhill Road, Orem, UT 84058

The family of Virginia Ray Cotton McKinney created this Life Tributes page to make it easy to share your memories.

Virginia Ray Cotton McKinney lived a wonderful life. She was...

Send flowers to the McKinney family.