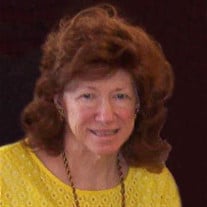 Vivian Lee (Whiteside) Chase passed away at her home in Kingman, Arizona on November 29, 2017 at the age of 72. She worked for the state of Missouri at the Higginsville Habilitation Center for fifteen years as a Developmental Assistant. She was the wife of Stephen K. Chase, her husband of 50 years who also worked at the center as a supervisor and counselor. Vivian was born on October 18, 1945 in White Plains, Alabama and moved to Battle Creek, Michigan when she was eight years old. She attended Brigham Young University in Provo, Utah where she met her husband. They were married in the Salt Lake City, Utah LDS Temple for time and all eternity on May 26, 1967. They moved to Higginsville, Missouri in 1979 and built their own house, doing most of the labor themselves, and buying the materials as well as never borrowing any money. Vivian was a talented seamstress making her own clothes and clothes for others. She had a beautiful Soprano voice singing with her husband, with groups and performing solos. She loved doing genealogy work tracing her family tree as far back as she could recording names, dates, and places. She had the ability to make something look better by altering its appearance or adding embellishments. She was loved by her family and had a determined self-disciplined personality in doing what she wanted to do. She was an active member of The Church of Jesus Christ of Latter-day Saints. She is survived by her husband, Stephen K. Chase of Kingman, AZ; their four children: Timothy S. Chase of Warrensburg, MO; Charrea (Douglas) Camacho of Kingman, AZ; Vivalea (Edward) Sheppard of Mount Pleasant, MI; and Stephen W. Chase of Warrensburg, MO; seven grandchildren: Conner, Bryanna, Chase, Hannah and Leanna Camacho; and Viveca and Leah Sheppard; a brother, Larry L. Whiteside of Ohio; and two sisters: Patsy (Bob) Caraway of Battle Creek, MI and Charlotte (David) Knapp of Morehead City, NC. Funeral services will be held at 10:00 a.m., Saturday, December 9, 2017 at the Berg Drawing Room Chapel, 185 East Center Street, Provo, Utah. Friends may call from 9-9:50 a.m. prior to services. Interment will be in the Provo City Cemetery. Condolences may be expressed to the family at www.bergmortuary.com.

Vivian Lee (Whiteside) Chase passed away at her home in Kingman, Arizona on November 29, 2017 at the age of 72. She worked for the state of Missouri at the Higginsville Habilitation Center for fifteen years as a Developmental Assistant. She... View Obituary & Service Information

The family of Vivian Lee Chase created this Life Tributes page to make it easy to share your memories.

Vivian Lee (Whiteside) Chase passed away at her home in Kingman,...

Send flowers to the Chase family.