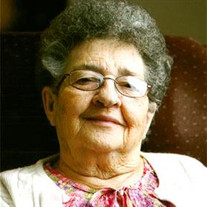 Our beloved Mother, Grandmother, Great-grandmother and friend, left this mortal life on Saturday March 26, 2016 at 1:30 pm. at the age of ninety-six. Vivian was born on January 5, 1920 in her grandparent’s home in Leavenworth, Kansas to Cora Charlotte Hicks and Hubert Kenneth Hodson. Her father was in the Army stationed at Fort Leavenworth. When Vivian was three years old, she and her parents moved to Provo, Utah where they lived with her paternal grandparents in her father’s childhood home. At five she and her mother relocated back to Kansas during the great depression. Her father later found work at a pipe plant and brought the family back to Provo where her brother Melvin and sister Bernice were born. She grew up in Provo and attended Provo City schools graduating from Provo High in 1938. Upon graduating, she went to work for her uncle in the Walgreens Drug store at the soda fountain. This is where she met Howard M. Betts. They were married Easter Sunday, March 24, 1940. Their marriage was later solemnized in the Salt Lake City LDS Temple August 24, 1967. Vivian and Howard raised four children: Rosalie, Merianne, Howard Kenneth (Kenny), and William Edwin (Eddy). They purchased their first house in 1954 in Provo, Utah. Two years later, they bought a brand new home in Orem, Utah where she has lived for the past 60 years. She loved crafting; painting, crocheting, knitting and sewing just to name a few. She wrote poetry and was very skilled. She belonged to a craft club and the Daughters of Utah Pioneers. She loved people and made many friends in her life. The people closest to her always said she never had a problem making friends and keeping them for years. Vivian was preceded in death by her daughter Rosalie in 1993 and her husband Howard in 2002. Her living children, 15 grandchildren, 31 great-grandchildren, and great-great-grandchildren will all miss her dearly. We love you! Funeral services will be held at 11:00 a.m., Wednesday, March, 30, 2016 at the Lakeridge 8th Ward Chapel, 80 West 900 South, Orem, Utah. Friends may call from 9:30-10:45 a.m. prior to services. Interment will be in the Payson City Cemetery. Condolences may be expressed to the family at www.bergmortuary.com.

Our beloved Mother, Grandmother, Great-grandmother and friend, left this mortal life on Saturday March 26, 2016 at 1:30 pm. at the age of ninety-six. Vivian was born on January 5, 1920 in her grandparent&#8217;s home in Leavenworth, Kansas to... View Obituary & Service Information

The family of Vivian Maxine Hodson Betts created this Life Tributes page to make it easy to share your memories.

Send flowers to the Betts family.