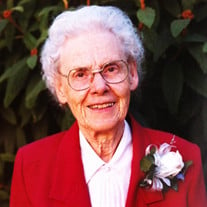 Vivian Olsen Simmons, 97, passed away on December 22, 2017. She was born in Ephraim, Utah on January 27, 1920 to Daniel K. and Dora Perry Olsen. Vivian grew up in Ephraim, Utah. She was an excellent student and graduated as valedictorian from Snow College in 1940. She married Elbert R. Simmons September 4, 1940 in the Salt Lake LDS Temple. Their life together took them to San Francisco, Sun Valley, ID and other places during World War II and to Ithaca, NY and Bozeman, MT before eventually settling in Provo, UT. Vivian began her career in elementary education after attending BYU and then graduating from Utah State University. In 1943 she taught children at the Japanese Relocation Center in Topaz, UT. She also taught elementary school in Ephraim, UT and for 20 years at Wasatch Elementary in Provo as the special education teacher. She enjoyed teaching and seeing the progress of her students. Vivian was always an active and faithful member of The Church of Jesus Christ of Latter-day Saints. Her strong testimony had a great influence on her family. She held many callings in the Church’s organizations and served as an ordinance worker in the Provo Temple. She and her husband served a mission together from 1982-1983 in Jamaica. Vivian was an avid gardener, and at age 96 was still gardening and sharing her produce. Her children will especially miss having her green beans, squash and tomatoes in the summer. She played the piano and taught piano lessons to her children. Her greatest joy was her family, and she felt blessed to be the mother of four. She is survived by her children: Rulon E. Simmons (Rebecca), Rochester, NY; Elaine S. Cornish (Devn), Salt Lake City, UT; Daniel G. Simmons (Leesa), Orem, UT; and Janet S. Christenson (Allen), Provo, UT. She is also survived by her sisters, Winnifred O. Cope and LaPrele O. Sumsion. She was preceded in death by her husband and her brother, Ward Olsen. Vivian was blessed with 18 grandchildren and 60 great grandchildren. Funeral services will be held on Saturday, December 30 at 11 a.m. at the Provo Peak 5th Ward Chapel, 965 North Locust Lane, Provo, UT. There will be a viewing that day at 9:30-10:45 a.m. Interment to follow in the Provo City Cemetery, 610 South State Street, Tuesday, January 2 at 1:30 p.m. Condolences may be expressed at www.bergmortuary.com.

Vivian Olsen Simmons, 97, passed away on December 22, 2017. She was born in Ephraim, Utah on January 27, 1920 to Daniel K. and Dora Perry Olsen. Vivian grew up in Ephraim, Utah. She was an excellent student and graduated as valedictorian from... View Obituary & Service Information

The family of Vivian Olsen Simmons created this Life Tributes page to make it easy to share your memories.

Send flowers to the Simmons family.