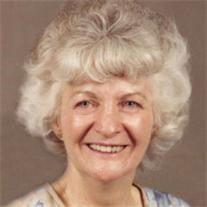 Our loving mother, and grandmother, VonCeile Shelley, 89, passed away peacefully at her home Thursday, March 29, 2012. She was born December 12, 1922 in La Grande, Oregon to Saxon Berners Bruce and Pearl Rosenbaum Bruce. She attended schools and graduated from high school in La Grande. She then moved to Provo, Utah to attend school at BYU where she met and married Donald "M" Shelley. They were married in the Manti Temple January 30, 1948. Vonnie was a talented dancer and traveled much of Oregon performing in her youth. She was an active member of the LDS church where she served in many callings, including Primary President, Primary Secretary, and Ward Librarian. She and her husband owned and operated Don Shelley Chevron on the corner of 500 N. and 500 W. for 9 years. They also owned and operated Don Shelley Towing from 1971-2002. She was a big BYU and Utah Jazz fan till the day she passed away. Vonnie is survived by her five children, Gary M. (Marie) Shelley, Kenneth L. (Lucille) Shelley, Cheryl (Randy) Halliday, Don D. Shelley, Janeen (George) Randall, 17 grandchildren, 26 great-grandchildren, and 2 great-great grandchildren. She was preceded in death by her husband, parents, two brothers, Jim Bruce and Morris Bruce, and her sister Evelyn Bruce Blaser. Funeral services will be held at 11:00 a.m., Tuesday, April 3, 2012 at the Berg Drawing Room Chapel, 185 East Center Street, Provo, Utah. Friends may call at the mortuary Monday evening from 6 until 8 and Tuesday morning from 10-10:50 a.m. prior to services. Interment, East Lawn Memorial Hills, Provo. Condolences to the family may be sent through her obituary at www.bergmortuary.com/obituaries.

The family of VonCeile Bruce Shelley created this Life Tributes page to make it easy to share your memories.