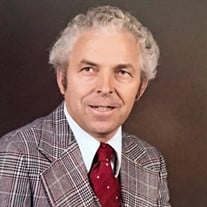 Our sweet father, Wallace Winchester Hutchison, passed away peacefully at home, June 23, 2019 at the age of 88. He is survived by his six children; Linda Stripling, Robert Hutchison (Holly), Micheal Hutchison (Tafel), Bret Hutchison (Becky), Julie Hale (Richard), Jill Birrell (Scott), 18 Grandchildren, 17 great-grandchildren, a sister, Nancy Ward, and brother Jack Hutchison. He is so happy to be reunited with his sweetheart of 68 years, Rada Bronson Hutchison, for time and all eternity. Wallace was born in Malta, Idaho on September 17, 1930 to Garrett Hutchison and Myrtle Winchester Hutchison. He was the third child of six children. Wallace met his eternal companion, Rada Bronson, in Malta, Idaho. They were married in the Salt Lake Temple, January 30, 1950. They met in grade school when Rada was 5 and Wallace was 6 years old and then married right out of High School. Wallace was a faithful member of The Church of Jesus Christ of Latter-day Saints. Wallace held many church callings: Branch President, Bishop’s Counselor, High Council, Young Men’s President, Seminary Teacher, Explorer Scout Leader, and Sunday School Youth Teacher. Wallace loved his daily scripture study and never missed a day. Wallace and Rada served three missions; Scotland, Salt Lake City Temple Square, and the Provo Utah Mission Office. He also enjoyed serving 15 years as a Temple worker in the Provo Temple. Wallace was an exceptional athlete and loved anything to do with BYU athletics and his beloved NY Yankees. Wallace was offered a full ride scholarship, in basketball, to Idaho State University. Wallace graduated from Raft River High school. He began working for Kraft foods in Malta, Idaho, making cheese products. He moved his small family to Provo, UT to attend school at BYU. Wallace was a natural athlete and excelled in any sport that he participated in. He went to BYU for his under graduate and master’s degrees and completed a PH.D from The University of Utah, in Exercise Physiology. He was a professor at Iowa State University where he remained until he retired. He was the founder of the Iowa State University Exercise Clinic. He was interviewed for the Church News (April 21, 1979 issue) highlighting his accomplishments as a faithful member of The Church of Jesus Christ of Latter-days Saints and his leadership role in Health and Fitness in the community. Of all of his accomplishments, Wallace was most proud of his six children. He was a devoted husband, father, and grandfather. He lead by example and did not expect his children to do anything that he was not willing to do. He devoted many of his later years, tending to the needs of his beloved wife, never complaining and serving willingly and lovingly. Wallace is reunited with his one and only true love, for time and all eternity, his beloved Rada. Graveside services will be held at 11:00 a.m., Saturday, June 29, 2019 at Eastlawn Memorial Hills, 4800 North 650 East, Provo, Utah. Friends may visit with the family at the Edgemont South Stake Center, 350 East 2950 North, Provo, Utah, from 9:30-10:30 a.m. prior to services at the cemetery. Condolences may be expressed at www.bergmortuary.com

The family of Wallace Winchester Hutchison created this Life Tributes page to make it easy to share your memories.

Send flowers to the Hutchison family.