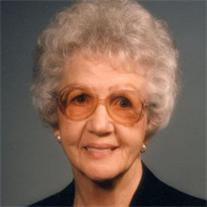 Wanda Christensen Child was born on August 8, 1923, in Hyde Park, Utah, to Junius Everett and Vera Thurston Christensen. She was the fourth of eleven children. She passed away peacefully at her home on Wednesday, late afternoon of May 8, 2013. Raised during the years of the Great Depression, she learned to work in the fields, to raise what they ate, to take care of what they had, and to make do or do without. Through these refining years, she became kind and compassionate, gentle and loving, hardworking, independent to a fault, and self-sufficient. She met her eternal companion, Leon Child, upon his return from his mission to Hawaii. He was called to be a Sunday School teacher, and she was in his class. Together, they created their eternal family. They were sealed April 4, 1945 in the Salt Lake Temple. Mom and dad created a piece of heaven on earth; a temple in their home. Her life was filled with hard work and service to others. These were her hobbies. Her enjoyment was taking care of and making others happy. She worked alongside her husband and children on the farm in Moses Lake, Washington and in the A & W Restaurant in Provo. She worked hard in Mom McFadden's Bakery in Provo in her later years and continually worked in her yard even through last summer. She served diligently in Primary and Relief Society presidencies, and as ward librarian for over ten years. She worked in the Provo Temple for several years and served a church service mission in the Family History Library. Wanda is survived by her two children: Karen (Ron) Peterson of Orem and Neil (Sharon ) Child of Provo; two brothers: Ariel (Marilyne) Christensen of Tucson, AZ and Rulon (Kathy) Christensen of Boise, ID; 10 grandchildren and 28 great-grandchildren. She was preceded in death by her husband, Leon (1994), and all but two of her siblings. Two of her siblings, including one who was a twin to Dennis, were stillborn babies. Her other siblings are LaGrand, Beth, Adella, Milton, Connie, and Dennis. We would like to give our sincere love and thanks to those neighbors, friends, and ward members who took such good care of and watched out for her for so many years. We also express our love from her for the many good caregivers from Encompass Hospice who also loved her and gave her such good care. Thank you, also to Dr. Jeremy Hadley. Funeral services will be held on Tuesday, May 14, 2013, at 11:00 a.m., at the Grandview South Stake Center, 1122 Grand Avenue, Provo. Friends and family may call at Berg Mortuary, 185 East Center Street, Provo, on Monday from 6-7:30 p.m. and at the church on Tuesday from 9:30-10:45 a.m. Interment, Provo City Cemetery. Condolences may be emailed to [email protected]

Wanda Christensen Child was born on August 8, 1923, in Hyde Park, Utah, to Junius Everett and Vera Thurston Christensen. She was the fourth of eleven children. She passed away peacefully at her home on Wednesday, late afternoon of May 8, 2013.... View Obituary & Service Information

The family of Wanda Child created this Life Tributes page to make it easy to share your memories.

Send flowers to the Child family.