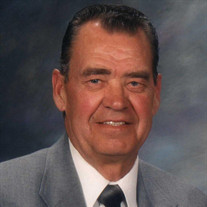 Warren Ernest Miller (87) of Orem passed away December 28, 2018. He was born February 5, 1931, in Farnum Freemont, Idaho to James Theron Miller & Luella Hendrickson Miller. He married Yvonne Clayton on March 24, 1949, in Nephi, Utah, and they were sealed in the Salt Lake Temple June 15, 1964. He is survived by his children, Jim (Carolyn) of Lehi; Jerry of American Fork; John (Sandra) of Saratoga Springs; Serena (Ken) Jacobson of Orem and Lania (Doug) Wells of Pleasant Grove, brothers, Theron Miller of West Haven and James Miller of Taylorsville; sister, Marilyn Peay of Orem; 20 grandchildren, 46 great-grandchildren and 2 great-great-grandchildren. He was preceded in death by his wife, parents, daughter-in-law Diane and sisters Ila, Belva and Verla. Funeral services will be held at 11:30 a.m., Thursday, January 3, 2019 at the Sharon Park Stake Center, 85 East 700 North, Orem, Utah. Friends may call at the church from 10:00-11:00 a.m. prior to services. Interment will be in the Pleasant Grove Cemetery. Condolences may be expressed to the family at www.bergmortuary.com.

The family of Warren Ernest Miller created this Life Tributes page to make it easy to share your memories.