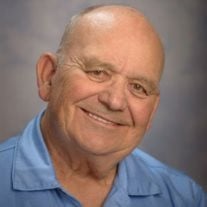 Born June 24, 1933 in Vernal, Utah, Warren Clayton Pitt, family man, architect, singer, could-have-been-pro golfer, and kind-hearted friend now made the heavens shine as bright as his smile on March 5, 2014. Geri Hanson Pitt and her and Warren’s children share the following, composed from the tributes that flowed in from hundreds of those who love, admire, and respect Warren. Dad began developing and honing his talents, skills, life perspectives, confidence and competitive nature as he grew up the 13th child of 16 children. Dad and his young brothers, known as “the boys” nurtured their competitive nature during intense games of marbles. You would never have heard of him letting anyone win in marbles, cards (we wish we knew his secrets), and especially golf. He became a hard-working, successful, self-made architect, whose influence can be seen all over Southern California. He carried on the Pitt music legacy by beginning to play the trombone and singing as a young boy. His strong tenor voice became easily recognized as he sang from the stage, in choirs, in the car, and around many a campfire. He was always confident and comfortable on a stage; laughing, acting, and singing with his fellow performers. At the times Dad was hard to find, he would most likely be found at the golf course (or the Costco food court). His passed his golf wisdom on to many of his friends, children, and grandchildren during early morning tea times. And he combined his talents when he helped to redesign the RiverView golf course. Dad had a beautiful perspective and love of life and people that he shared with others through his infectious laugh, lively conversation, and bright smiles. His non-confrontational, gentle nature made others feel unconditionally accepted and loved. His heart and home were always wide open to everyone. Family was important to Dad and he felt no greater joy than when he was with his siblings, children, and grand children. He was a loving and supportive father who taught and influenced his posterity. He and Geri were the parents their children’s friends envied. Who could compete with the comforting home, warm hugs, hot bread, rich fleakies, plentiful dill pickles, and delicious breakfasts? A member of The Church of Jesus Christ of Latter-day Saints, the seminal attribute he leaves behind is his Christian man’s love for his Heavenly Father and brother Jesus Christ. We are proud to be part of the Pitt legacy and will carry on his testimony of the gospel and follow his example of how a godly man serves and lives. He is preceded in death by his parents James Melvin Pitt and Sarah Estella Hall, 10 siblings, son Warren Douglas, and son-in-law Russell Holmes. Survived by his wife Geri, 5 siblings, children Karen (Skip), Steve (Cheryl), Sheryl, Dennis (Jacy), Lori (Brent), Tara, Jana (Loren), 25 grandchildren, and 33 great-grandchildren. A celebration of Warren’s love of life and family will be held at 11:00 AM, Friday, March 14, 2014 at the LDS “Apple Chapel” at 1038 North 1200 East, Provo, Utah. A viewing will be held at 9:30-10:45 AM. As dad served in the United States Army, the interment will be at 3 PM at the Veteran's Memorial Cemetery (17111 South Camp Williams Rd, Bluffdale, UT 84065). Berg Mortuary will handle the arrangements. In lieu of flowers, other expressions of love and support can be sent to Geri Pitt at 1160 Aspen Avenue, Provo, UT 84604 for the Warren Pitt Memorial Mission Trust.

The family of Warren Clayton Pitt created this Life Tributes page to make it easy to share your memories.

Send flowers to the Pitt family.