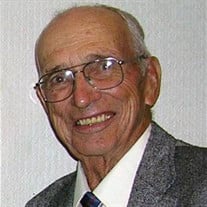 Wayne Burdell Davis, an amazing son, brother, father and grandfather died peacefully at the age of 89 at his Provo home surrounded by his family on December 19, 2015. He was born on March 8, 1926 in Provo, Utah to Dell B and Julia Rachel Olsen Davis. Wayne attended Page, Lincoln High and Central Utah Vocation Schools. He graduated from LDS Seminary in 1943. Wayne enlisted in the Navy in February 1944 and served for over two years during WWII. He served as a machinist on the USS LST 581 and USS LST 1020. While on these ships he covered many parts of the South Pacific carrying assault troops and equipment. He participated in the D. Day Assault on the Lingayen Gulf in the Philippines Islands and the Okinawa assault on D. Day. In his later years, he and Nancy attended many annual LST reunions across the country and enjoyed connecting with the men he served with. Wayne met the love of his life, Nancy Carol Johnson, at a local dance and they were married in Provo on January 7, 1950. Together they have five sons, 12 grandchildren, 18 great-grandchildren and 5 great-great-grandchildren. Wayne worked many jobs including being on the signal gang for the Denver & Rio Grande Railroad and the surveying crew building the Geneva Steel Plant. He spent over 30 years working for the Utah State Road Commission which he retired from in 1988. Wayne built a home and raised his family on the same property that his pioneer great-grandfather had homesteaded. There, they were blessed to enjoy their family as neighbors. He had a love and connection with the land and could create beauty and bounty from any piece of ground. Family and friends would never leave his house empty handed, as Wayne would share his fruits, vegetables or a gift of service. His love of nature did not end at his farm. He spent some of his most cherished moments in the great outdoors with friends and family fishing, hunting, and horseback riding. Wayne will be missed every day, but most keenly on the Fourth of July when the entire extended family would gather for a BBQ under his 100 year old walnut tree. Wayne is survived by his wife, Nancy Carol Johnson Davis; five sons, Lanny J Davis, Provo, Chad J Davis (Colette), Provo, Dell J Davis, Spanish Fork, Roy J Davis, Provo, Lynn Wayne Davis, Provo, sister Lela Stott, Provo and brother, Eugene Davis (Dixie), Monroe. He is preceded in death by his parents, Dell and Julia Olsen Davis, Provo and sister, Dora Davis, Provo. Funeral Services will be held at 2:00 p.m., Monday, December 28, 2015 at the Berg Drawing Room Chapel, 185 East Center Street, Provo, Utah. Friends may call from 1-1:50 p.m. prior to services. Interment will be in the Provo City Cemetery. Condolences may be extended to the family at www.bergmortuary.com.

Wayne Burdell Davis, an amazing son, brother, father and grandfather died peacefully at the age of 89 at his Provo home surrounded by his family on December 19, 2015. He was born on March 8, 1926 in Provo, Utah to Dell B and Julia Rachel Olsen... View Obituary & Service Information

The family of Wayne Burdell Davis created this Life Tributes page to make it easy to share your memories.