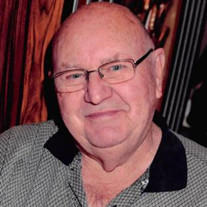 Wayne Darrell Tondro, age 79, of Hot Springs Village, Arkansas, went to be with the Lord, on Sunday, July 19, 2015. He was born on January 15, 1936, in Salt Lake City, Utah, the son of Darrell Raymond Tondro and Opal Ruth Gustavson Tondro. On February 26, 1983, he was married to Raelene Chase. He was preceded in death by his parents; his son, Dave “Dee” Perry; his sister, LaRene Tondro; and his brother-in-law, Grant Jensen. He was a U.S. Army veteran and a member of The Church of Jesus Christ of Latter-day Saints, where he faithfully served in many capacities for his church. A beloved husband, father, grandfather, great-grandfather and brother, he always put the love and needs of his family first in his life. He was a man of many talents and will be missed by all who knew and loved him. He is survived by his loving wife, Raelene Chase Tondro of Hot Springs Village; four sons and their spouses, Mark and Donna Tondro of Salt Lake City, Utah, John Tondro of Newport Beach, California, Brian and Laneel Perry of Kaysville, Utah and Rusty and Brittany Perry of Greenville, North Carolina; five daughters and their spouses, Marlene and Jerry Ritzman of St. George, Utah, Phyllis Downing of Long Beach, California, Katherine and Jimmy Cope of St. George Utah, April and Branden Burningham of Salt Lake City, Utah and Jennifer and Lon Kennard of Sandy, Utah; twenty-eight grandchildren; five great-grandchildren; one brother and sister-in-law, Keith and Phyllis Tondro of Salt Lake City, Utah; one sister, Joan Jensen of Salt Lake City, Utah; several nieces, nephews and extended family members; and a host of wonderful friends. Graveside services will be held at 10:00 a.m., Monday, July 27, 2015, in the Provo City Cemetery, 610 South State Street, Provo, Utah. Condolences may be extended to the family at www.bergmortuary.com or www.davis-smith.com. Arkansas arrangements were under the direction of Davis-Smith Funeral Home, Hot Springs.

Wayne Darrell Tondro, age 79, of Hot Springs Village, Arkansas, went to be with the Lord, on Sunday, July 19, 2015. He was born on January 15, 1936, in Salt Lake City, Utah, the son of Darrell Raymond Tondro and Opal Ruth Gustavson Tondro.... View Obituary & Service Information

The family of Wayne Darrell Tondro created this Life Tributes page to make it easy to share your memories.

Send flowers to the Tondro family.