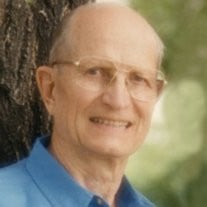 Welby Willis Ricks, age 95, died peacefully on Sunday November 3, 2013 in his home of natural causes. He was born February 2, 1918 in Rexburg, ID, the 5th of 9 children born to Hyrum Ricks Jr. and Alice O. Cheney. His family moved to Huntington Park, CA, where he attended school and graduated from Huntington Park High School in 1936. Welby served a mission for The Church of Jesus Christ of Latter-day Saints in the Eastern Central States in 1941-43. Following his mission, he served in the army during WWII. Welby attended Berkley and other colleges in CA then went to BYU, where he met and married Aretta Newren in the Salt Lake Temple on June 1, 1945. He graduated from BYU with a BS degree. He received his doctor’s degree in optometry from Southern California College of Optometry in 1947. He did graduate work at BYU in archeology and was President of the University Archeology Society for many years. Welby dabbled in real estate and loved making repairs and upgrades himself. He learned how to make stained glass windows, and made them for some apartments and some of his children’s homes. Welby gave selflessly of his time and was happiest when serving others. He served in many positions in the LDS Church, including counselor in bishoprics, high council member, and stake patriarch. He and Aretta served a full-time mission to the California Sacramento Mission, June 1992-93. Welby was preceded in death by his wife Aretta, son John (Marilyn), 2 sisters and 4 brothers. He is survived by his children: Stephen (Kathryn), Minot, ND; Timothy (Elizabeth), White Plains, NY; Suanne (Dennis) Jones, Mapleton, UT; Cynthia (Mark) Dayton, Provo, UT; Mathew (Kaye), Winslow, AZ; Daniel (Jane), SLC, UT; 35 grandchildren; 45 great-grandchildren and brothers, Artel and Clyde. Funeral services will be held at 11:00 a.m., Saturday, November 9, 2013 at the Pioneer 4th Ward Chapel, 376 North 700 West, Provo, Utah. Friends may call at the Berg Mortuary of Provo, 185 East Center Street, Friday, November 8, from 6-9:00 p.m. and at the church Saturday from 9:30-10:45 a.m. prior to services. Interment will be at East Lawn Memorial Hills, Provo, Utah. Condolences may be sent at www.bergmortuary.com.

The family of Welby Willis Ricks created this Life Tributes page to make it easy to share your memories.

Send flowers to the Ricks family.