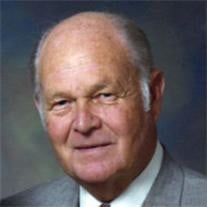 Wells Smoot Brimhall passed away on March 10, 2011 at his home in Provo, Utah. He was born in Provo on July 19, 1914. His parents were Wells Lovett & Fern Smoot Brimhall. He attended the BYU Training School, High School and University, graduating from the “Y” in 1935. He spent two years studying at Columbia University in New York City and two years of graduate work at Stanford University, where he received the MBA degree. He married Viva Maurine Jones, from Las Vegas, New Mexico in 1935. They were married in the LDS Temple in Salt Lake City. During their married years they lived in Utah, California, New York and Illinois. They had 5 children. Smoot served two years in the military service during World War II. Then he and his family settled in Provo where Smoot was active in business and civic affairs. Smoot joined with Phil Knight to open and operate Knights Men’s Shop on University Ave for 20 yrs. He served terms on the Provo City Commission, Provo City Council, and was a Director of State Bank of Provo, becoming President of the Bank before it merged with The Springville Banking Company and the name changed to Central Bank & Trust Company. He was a member of the High Council of the first LDS Stake on the BYU Campus. He was appointed to the office of Utah State Bank Commissioner (the name of the office later changed to Commissioner of Financial Institutions) by Governor Calvin L. Rampton. He served in that office for 13 years before retiring in 1988, after which he spent several years with Tracy Collins Bank & Trust Company in Salt Lake, serving as Consultant to the Chairman. Smoot was an Eagle Scout and supported the Boy Scout program throughout his life. He was an active member of the Kiwanis Club in Provo and also in Salt Lake City. He and Maurine were both active in support of their son George, and his associates, in the building of Family Recreation Parks and other business activities in California and Arizona. He and Maurine moved back to Utah Valley in 1988 and lived there during the summers and in Phoenix, AZ, during the winters. Maurine passed away in 2001. Smoot married Helena Call Jacobsen on August 8, 2002, in Jackson Wyoming. They have traveled together, supported each other’s children and enjoyed a very special relationship together for the past 8 years. He was pre-deceased by his wife Maurine, his sister, Sina B. Stevenson and his son, Wells Lorin Brimhall. He is survived by his wife, Helena, brother Victor O. Brimhall, daughters Janelle (Peter) Lysenko and Bonnie (Dick) Kofford, his daughter-in-law Sue (Wells, deceased) Brimhall and sons Stephen (Mary Jo) Brimhall and George (Brenda) Brimhall; Helena’s daughters Jeri (John) Snow, Betty Lynne (Ernie) Middleton, and Barbara (Kevin, deceased) Sondrup; 23 grandchildren, 76 great-grandchildren and 3 great-great-grandchildren. In lieu of flowers the family requests donations be sent in his name to Utah National Parks Council, Boy Scouts of America (748 N 1340 W, Orem, UT 84057). Funeral services will be held at 11:00 a.m., Wednesday, March 16, 2011 at the Pleasant View 9th Ward Chapel, 2445 N Timpview Dr (650 East), Provo, Utah. Friends may call at the Berg Mortuary of Provo, 185 East Center, Tuesday evening from 6 until 8 and at the church Wednesday one hour prior to services. Interment, Provo City Cemetery. Condolences may be sent to the family through www.bergmortuary.com.

Wells Smoot Brimhall passed away on March 10, 2011 at his home in Provo, Utah. He was born in Provo on July 19, 1914. His parents were Wells Lovett & Fern Smoot Brimhall. He attended the BYU Training School, High School and University, graduating... View Obituary & Service Information

The family of Wells Brimhall created this Life Tributes page to make it easy to share your memories.

Send flowers to the Brimhall family.