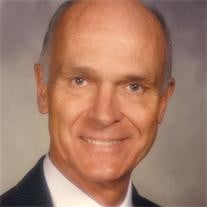 Wendel K. Walton, age 81, died August 1, 2012, of leukemia. He was born January 25, 1931, in Berkeley, California, the son of Owen K. Walton and Delsa Brydson Birch. After graduating high school in Albany, California, he served the LDS Church as a missionary in the New England States and then served his country as a soldier in the U.S. Army. He received bachelor's and master's degrees from San Francisco State University and a PhD in audiology and speech language pathology from The University of Washington in Seattle. He had faculty appointments at Fresno State University and The University of Washington, and he finished his professional career as a consultant for the State Department of Education in Connecticut. After retirement, he was productive in helping his wife Elaine with her various academic research projects and in writing four books of family history memorializing the lives of his ancestors. Wendel married Carma Lynee Collett on June 8, 1954. They were the parents of six children: Kyle, Carol, Wendy, Sean, Marc, and Bruce. Carma was killed in an automobile accident in 1986. He married Elaine Fish Southey on May 22, 1987, creating a blended family with her four children: Mary Anna, Kevin, Sarah, and Susannah. In addition to the 10 children, Wendel is survived by a sister, Diane Grimaud, 29 grandchildren, and 6 great-grandchildren. Wendel was a devout member of The Church of Jesus Christ of Latter-day Saints. Throughout his life he served in numerous church callings including Bishop (twice), stake high council (three times), MTC branch president, and temple ordinance worker. He was a gifted teacher and speaker. Funeral services will be held on Monday, August 6, 2012 at 11:00 a.m. in the Edgemont 9th Ward Chapel, 4300 North Canyon Road, Provo. Friends may call at the church on Sunday evening from 6 until 8 and on Monday morning from 9:30 until 10:45. Interment will be in the Eastlawn Memorial Hills Cemetery. Condolences may be sent through his obituary at www.bergmortuary.com.

The family of Wendel Walton created this Life Tributes page to make it easy to share your memories.

Send flowers to the Walton family.